Book Review — Emblems of the Passing World: Poems after Photographs by August Sander 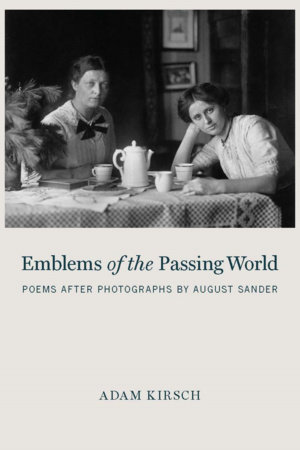 Emblems of the Passing World: Poems after Photographs by August Sander by Adam Kirsch is a collection of photographs by August Sanders accompanied by descriptive poetry written by Kirsch. Sanders is described as the most important portrait photographer in Germany during the pre and interwar years. Kirsch is the author of two collections of poems and several books of poetry criticism. A senior editor at the New Republic and a columnist for Tablet, he also writes for The New Yorker and the New York Review of Books.

First and foremost the pictures are stunning. The black and white photographs almost seem to have a three-dimensional effect. There seems to be a realism to the pictures, in that I mean looking through a window rather than at a picture. I received this as an ebook and am happy to have read it on my Kindle tablet rather than my Paperwhite. The photographs are art in themselves that need to be viewed in the highest quality.

The photographs capture real people in portraits from various walks of life. From a brick layer to laboratory technicians to a university librarian. The well-weathered faces of farmers who spent their life in the elements strike a vivid pose. Some pictures seem rather startling and even disturbing. “My Wife in Joy and Sorrow” shows a mother holding twin children in christening gowns one child alive and the other clearly deceased is a haunting photograph in itself.

The poetry catches the spirit of the times. The match seller and the bricklayer show the very real separation of the classes and the rise of that “Spectre” that was spreading across Europe. The poems are based off the picture and the original title. Some of the poetry fits very well and compares to the pictures and the times they were taken. Some seem to detract from the pictures, or that may be my own interpretation of the photographs

Today we are flooded with pictures of friends, pictures of what your friends are having for dinner, complete with filters, special effects, and even photoshopped. This collection is from a time when photographs were special events. They are powerful images of the past and a true look at the people in the past. A century has passed since many of these photographs have been taken and it would be safe to say that all the subjects, even the youngest, have all passed, but their images seem to capture and hold firm on a moment in time. It is a bit of history, that as hard as it seems, goes beyond written words of the past and even beyond period newsreels. The capturing of a single instant does seem to be worth a thousand words…or more.

4 responses to “Book Review — Emblems of the Passing World: Poems after Photographs by August Sander”