Book Review — In the Shadow of Young Girls in Flower: In Search of Lost Time, Volume 2 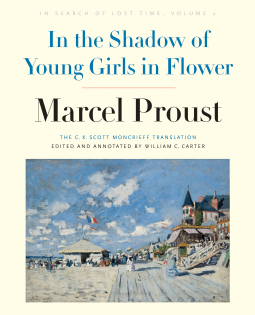 In the Shadow of Young Girls in Flower: In Search of Lost Time, Volume 2 by Marcel Proust is sad to say my first Proust. I am happy to say that it will not be my last. There is something about French poetry that I find irresistible and in the few French prose books, mostly Hugo, that I have read. In this Yale edition, William Cater uses C. K. Scott Moncrieff’s translation and corrects errors in this annotated edition.

There is almost a lyrical quality to this work:

He strode rapidly across the whole width of the hotel, seeming to be in pursuit of his monocle, which kept darting away in front of him like a butterfly.

As to the pretty girls who went past, from the day on which I had first known that their cheeks could be kissed. I became curious about their souls. And the universe became more interesting.

There is a capturing of a youthful adulthood in the book. There is humor and lightness throughout the book and a connection with an older reader’s past. It takes one back and makes one wonder what happened to those days.

The Yale publication is not so much a re-release of a book that is available in public domain. It is refreshing to see a classic work re-published by a major university press, especially in the sea of pop fiction flooding into the market.

What makes this volume particularly appealing is the work is the research and annotations done by Carter. Many might dismiss the importance of a new translation of a classic work, but for years the English speaking world believed Camus’ Marsault opens “The Stranger” with “Mother died today.” Instead of the much warmer “Mamam (Informal, like mommy)died today.” which is in the latest translation. A single word changes our first impression of Marsault. Detailed and copious notes indicate changes in the translations to keep truer to Proust’s original French text.

Although I cannot directly comment on corrections, they do seem to be well researched and reasoned. Reading this edition has peaked my interest in Proust and I am going to pick upSwann’s Way and read the from the beginning.

One response to “Book Review — In the Shadow of Young Girls in Flower: In Search of Lost Time, Volume 2”