Book Review — The Guardians: The League of Nations and the Crisis of Empire 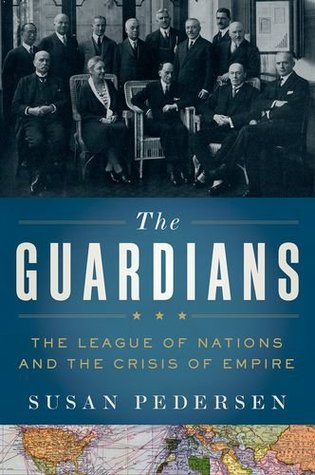 The Guardians: The League of Nations and the Crisis of Empire by Susan Pedersen is a detailed account of the organization that formed after World War I as part of Woodrow Wilson’s Fourteen Points. Pedersen is a historian and James P. Shenton Professor of the Core Curriculum at Columbia University. Pedersen focuses on 19th and 20th-century British history, women’s history, settler colonialism, and the history of international institutions. She received both her B.A. (1982) and Ph.D (1989) from Harvard University.

In the late 1980s, I worked in Geneva, Switzerland and every day walked past the League of Nations Building on my way to work. I thought of it as a grand experiment and a building that represented hope for the future as well as the seed that the UN and international organizations grew. It felt special to be that close to such a piece of history.

The League of Nations is probably best known for its inability to prevent the second world war and is seen by the Realist thinkers as the failure of the Liberal Theory of International Relations. Europe was able, for the most part, to keep the peace through a balance of power. Peace was not kept because nations decided to be peaceful, but because the cost of war was too high. The idea of the League of Nations is that enlightened nations want peace and that diplomacy and international law could solve any problems that arose. In reality, it was much more more complicated. Nations that joined were not required to stay members. Germany, Italy, Japan, The USSR, and most of South America left. What is surprising, however, is how many nations actually joined, or were brought in as commonwealths, colonies, or mandate. I was truly a worldwide organization with only The United States (and it territories), Tibet, Mongolia, Nepal, and present-day Yemen and Saudia Arabia absent.

Pedersen looks at the formation of the League of Nations and, in particular, the area that many people do not associate with the league — the mandates. The League took over German colonies and non-Turkish Ottoman lands. Although the League members made efforts to appear as being all inclusive and all equal in public, it was essentially the white European nations that held power. France and England openly struggled for power and land. Those countries that did not like the results simply left the organization.

Some blame the failure of the League on the United States’ refusal to join. It is true that American involvement would have likely countered European desire for empire and the expansion of empire. The problem, however, was much deeper. European powers saw colonial lands and the mandates as unable to rule themselves. This attitude was also held by Wilson especially in Latin America. Ironically, after almost three hundred years of balance of power politics the sudden shift to a democratic league left the European powers unable to function beyond their own interests. Europe, from the perspective of a stable continent, was far worse now than it was with alliances.

The mandates proved to be a problem that Europe was unable to handle. They are still a problem today with Palestine being at the forefront of the news. Rwanda made the news in the 1990s for genocide from strife going back to the mandates and one would be hard-pressed to find a success story in the mandates.

Pedersen provides a deep, well-researched history of the League of Nations. The work is very well documented and uses a variety of source material. Just as there is more to the origin of World War I than many people understand, there is much more to the League of Nations than simply its failure to prevent WWII. Even with holding a master’s degree in international relations, I learned a great deal from this book. I now have piles of notes and new information to be used when discussing and writing about international relations. The Guardians provides an excellent history of the beginnings and unfortunately the failure of the Liberal Theory. An excellent book for students of foreign affairs and the history of foreign affairs.

5 responses to “Book Review — The Guardians: The League of Nations and the Crisis of Empire”