Book Review — Crisis and Reform in the Canadian Armed Forces 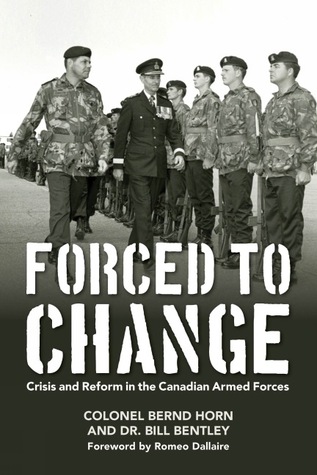 Crisis and Reform in the Canadian Armed Forces by Bernrd Horn is a look at the post-Cold War Canadain military. Colonel Horn is an experienced Canadian Forces infantry officer and military educator. He has authored or edited more than 35 books, including No Easy Task: Fighting in Afghanistan andNo Lack of Courage: Operation Medusa, Afghanistan.

The Canadian military had a problem. After decades of preparing for war in Central Europe, its enemy was gone. This would seem like a good problem but what happened instead was that it exposed several problems that had been lying dormant.

Not everything went as planned and during the humanitarian mission to Somalia two soldiers brutally beat to death a Somali teen. Gruesome photographs were published and the CBC reporter received altered documents and evidence of a cover up. This act lead to the disbanding of the soldier’s unit the elite Canadian Airborne Regiment. Canadian public opinion of the military fell to an all-time low of 28% favorable rating. Horn tells the reader that it is more than simply the act of two soldiers. It is a deeply rooted problem in the military.

The Cold War set up a system of complacency for the military, especially the officers. Canada had a set role in the Cold War and Cold War exercises. It became routine. It became so routine that it had its own acronym “SALY” — Same As Last Year. There was no need for thinking. Military exercises simply became doing the same thing as you did last year. Once the scripted was written, all that was needed was to follow instructions.

SALY also created another problem. Since all one had to do is follow the same instructions over and over again, mistakes were not tolerated. Officers developed a “cover your ass policy.” If mistakes were made, make sure you are not responsible. Although this may save the officer, troops lost their confidence that their officers would stand up for them. Counter to this in my time as a Marine, I made plenty of mistakes and the culture there was different. When something went wrong, I needed to explain to senior NCOs or my officers what happened. If I acted in good faith, I would be told ” Good initiative, but poor judgement. Don’t let that happen again. Carry on.” It might sound a bit demeaning, but it was better than getting burned for making a mistake. The culture here was “if you can think of a better way try it.” Granted, if you did something stupid or outright dangerous you could expect a much harsher response.

Horn identifies the problems in the old system and explains the actions taken to fix them. The military is difficult to change since the senior people are the most entrenched and least likely to invite or accept change. Horn covers the proposed solutions and what he feels would best help the system. This is a detailed book in the area of real life problem-solving and the military system. As an American, I needed to look up the Somali Affair and a few other events such as the consolidation of the Canadian Armed Forces. There is not much for the average American reader, but American military figures are used and quoted in this book. A timely book for Canadians and those interested in the policies of other countries’ militaries.