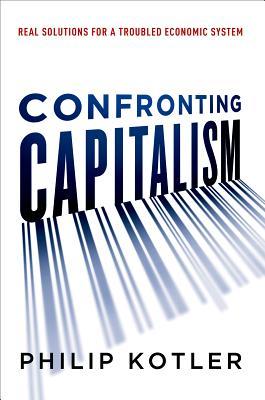 Confronting Capitalism: Real Solutions for a Troubled Economic System by Philip Kotler is a contemporary look at American Capitalism. Kotler studied at DePaul, earned his Masters from the University of Chicago and his Ph.D. in economics from MIT. He studied under three Nobel laureates: Milton Friedman, Paul Samuelson, Robert Solow. Kotler is currently the S. C. Johnson Distinguished Professor of International Marketing at the Kellogg School of Management at Northwestern University.

In earning my Masters in International Relations, I was required to take economics at the graduate level as well as going back to take the undergraduate courses to complete my degree. In my experience economics was dry and focused on theory rather than the effects — the supply and demand curve rather than the real world effects of capitalism. In political science capitalism was just accepted as the only working system because we won the cold war. Communism was dead, even though it never really existed. Capitalism is the same. Ayn Rand called capitalism the unknown ideal believing that it was never truly tested. It was always interfered with by government. The result was two systems that never existed, in fact, but one claimed to be the winner.

The second problem with economics is that it is indeed very complex in the real world. However, many people’s understanding of it comes from sound bites on the news or political commentators. A few might even aspire to read Ayn Rand’s fiction, but almost no one has read Adam Smith all the way through or for that matter Marx. We live in a country, which in the world view, sees very little difference between our political parties, yet people call the two major parties socialist and capitalist/fascist. Our economic viewpoints wax and wane on how well the economy is doing at the moment.

Confronting Capitalism does something I have not seen before. It takes economics and puts it on a practical human scale. It discusses the things that the victor of the Cold War would rather not mention, the very real flaws of the system. Kotler brings to the table fourteen of these problems. They include the boom-bust cycles, damage to the environment and limited natural resources, persistent poverty, personal debt burden, unemployment caused by automation, the influence of wealth on government, and the growing concentration of wealth into the hands of the few. These are all real aspects of economics that affect the common person.

Kotler in plain words and clarity explains what is ailing our system. It is not an attack on capitalism but something more like a doctor’s visit. Much like a doctor examining an overweight smoker, Kotler does not condemn the system but rather points out the problems and offers serious solutions — quit smoking, eat healthier, exercise so you can become stronger and live longer. Kotler keeps his attention on practical matters. Instead of awarding CEO’s bonus for yearly gains, focus on long term growth. Short term growth creates an unstable system that works on cutting workers, quality, and what ever else that can increase short term profit. He gives examples of other companies that focus on the long term and still make profits.

Confronting Capitalism also looks to balance. Unrestricted capitalism is much like Rand’s Unknown Ideal, unknown. What we fail to recognize is that the government has been involved in the economy since the beginning of the country. One of the first major issues with our new country was the Whisky Rebellion — taxes. We like to think the West was settled solely with rugged individualism, but it was the government that granted tracts of land to the railroads which opened the West. Eisenhower used the federal government to create the interstate highway system. Between the two of those systems most of our industry and consumer goods flow. The government has always been involved in the economy.

Kotler gives a centrist view on capitalism. He presents what is right and what is wrong with the current system. What separatesConfronting Capitalism from other economics books is the author’s style and method. Kotler is very clear and concise in his writing and writes so that he is understood by the general public. It is economics for the masses, but without any dumbing down. What Carl Sagan and Stephen Hawkings did and do for science Kotler does for economics. It is this type of clear thinking that is needed to get American’s to understand economics as a system and not an isolated issue. An outstanding read.