Book Review: The Occupiers: The Making of the 99 Percent Movement 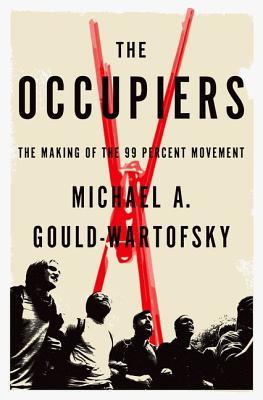 The Occupiers: The Making of the 99 Percent Movement by Michael A. Gould-Wartofsky is a first-hand account of the Occupy Movements across the country. Gould-Wartofsky has a BA from Harvard College and is a Ph.D. Candidate in sociology at New York University. His writing has appeared in The Nation, Monthly Review, Mother Jones, and other publications.

Living in Dallas, TX, much of what I heard about the Occupy Movement was through Twitter and a handful of New Yorkers who posted about it. Dallas did have a small Occupy Movement that did not bring much media attention. New York and Oakland received some attention and I even heard of my home Cleveland in the mix. But, it seems, just as fast as Occupy rose to headlines it disappeared. Bits of scattered news pieces remained until Occupy Oakland was cleared from Ogawa Plaza with violence and an army of law enforcement.

Pieces of the organization lived on in occupying foreclosed houses and returning the issue of student loan debt the forefront. Student loan debt now stands at $1 trillion. Many graduates even in a good economy would have trouble paying back their loans. The idea of getting an education and a good job, as a result, is disappearing. The housing bust, bad loans, and variable interest rates have left many on the streets. I am not an alarmist, but a shrinking middle class is not healthy to any economy. Consumer goods for the large part are bought by the middle class and a large middle class is essential in capitalism.

Gould-Wartofsky embedded himself in the Occupy Movement and reported what he saw. Inside the group, he had more access to the day to day activities and planning. While other reporters were moved by the police to certain cleared areas, Gould-Wartofsky was in the thick of it. Police behavior to mainstream journalists received national attention as journalists were prevented from covering events and in some cases beaten and arrested.

Some interesting points in general are brought up by the author. The legal status of Zuccotti Park and its classification as private-public property was new knowledge for me. The camp was also used by the police to dump the homeless and others they did not want to deal with. Perhaps one of the most interesting aspects of the 99% is why the movement died out. There was a common enemy to bring the groups together, but inside that group were many factions who held to the idea of equality, but differed vastly in their methods. There was everything from moderates wanting to work with the system to anarchists who want to destroy the system entirely.

The Occupy Movement is still around in splintered groups. It played a role, some will say an important role, in reminding people of what is happening. Massive bailouts for banks and huge debts for students. Bonuses for bankers and foreclosures for others. In recent news something that has become a subject of conversation again, the behavior of police and protesters. Gould-Wartofsky first-hand accounts are backed up with scholarly documentation. Nearly one-third of the book is cited material. This is more than a first-hand account, it is a very detailed study of the group. The Occupiers is an excellent look into the group that made headlines and whose voice is still faintly echoing through society waiting for a “mic check.”