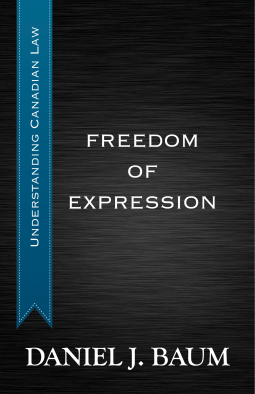 Freedom of Expression by Daniel J. Baum is a study of the fundamental rights and freedoms under Section 2 of the Canadian Charter of Rights and Freedoms (1982). Baum has been a law professor for over forty years and has written numerous books on law. As an American, I looked forward to the comparison between Canada’s equivalent to the First Amendment and what, if any real difference two hundred years would make in designing a “Bill of Rights.”

Canadian Charter and the American Bill of Rights guarantee very similar rights including religion, speech, and life, liberty, and the security of the individual. It is not too surprising that the cases in the book are very similar to American cases brought to the Supreme Court. Cases include political speech, hate speech, religious freedom, students rights, and indecency/obscenity. Reading through the cases I was able to draw a close parallel to American cases over the last fifty years.

Each chapter presents a case background, the court rulings, higher court rulings, judges opinions, and media opposition to the ruling. Baum also has some though thought exercises in “what if” scenarios. The case information is well documented at the end of each chapter as well as additional source material and an index at the end of the book.

Although this book is published in Canada for a Canadian audience, I found it extremely interesting as someone who has spent their academic years studying political science. For the most part, my education ignored our closest neighbor in culture, history, and tradition. Reading it now does show the common heritage that we took and evolved from Great Britain and made our own. Although there are differences in between our two countries, they seem minor in guarantee of rights and the interpretations of those rights. I found this book extremely informative, and recommend it to those interested in basic constitutional rights, either as Canadians or Americans looking for comparison. The book is written on the level that anyone with basic political science/government studies at the college or high school level can read and understand.