Book Review: The First of July 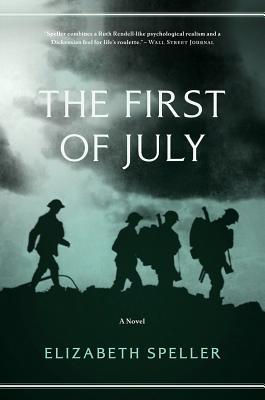 The First of July by Elizabeth Speller is a novel that examines the lives of four men leading up to the opening of the Battle of the Somme. Speller has lived throughout western Europe and currently splits her time between Gloucestershire and Greece. She has written for The Independent, Financial Times, Vogue, and Big Issue. This is her third novel.

I spend quite a bit of time reading World War I books, from Ernest K Gann’s In the Company of Eagles which started me in my early teens to Paul Jankowski’s Verdun in my current to read pile. I find it an extremely interesting subject and something that has driven almost everything in the twentieth century. I have stayed away from World War I fiction because I found it too easy to nit-pick and there is plenty of poetry to show the more human side of the war. Nevertheless, I gave The First of July a try.

The story follows four men starting in July 1913, three years before the start of the Battle of the Somme. Jean-Baptiste Mallet is a blacksmith leaves his home of Corbie, France before before the war; he is disenchanted with recent events in his town. Frank Stanton found his way to London when he was nineteen. He is a carpenter and made coffins before arriving in London. Frank becomes a store clerk and dreams of owning a quality bicycle. He has follows the Tour d’ France and the racers. Frank and his friend dream about bicycle touring. Benedict Chatto is from Gloucester is a music man and spends time with his friend Theo. Harry Sydenham lives in New York and is marrying Marina. Harry is British and has fled his home land keeping with him secrets he chooses not to share, even with his wife.

Speller takes these four men and shows the reader how the war will change the lives of all classes of people as the characters lives intertwine. Theo convinces Benedict to join the artillery with him, but no sooner does Benedict sign up, Theo signs on to be a pilot. Frank has no real desire to fight in a war once his friend Dick, who owns a fine Hercules bicycle, dies in the war. Benedict, meets Frank and suggest he join a cyclist brigade. That seemed to be a perfect tribute to his departed friend. On a personal level I was drawn in by Frank and his love of bicycles. The men’s stories are interesting and provide a realistic look into their personal lives and the personal issues their faced or kept secret. The book also gives a feel for the general feeling of the populations in France, Britain, and the United States.

The First of July is an excellent World War I novel. It focuses on the main characters and their families and give a nice human element to the war. The novel ends on the first day of the Battle of the Somme. This was the bloodiest battle of the war. For five months the battle went on and produced a million casualties. The British alone suffered 60,000 casualties on a single day, the July 1st. The story is interesting enough so I never had a chance to nit-pic or notice any historical inaccuracies. It is truly enjoyable to find a work of fiction that fits so well into an area of study mine.