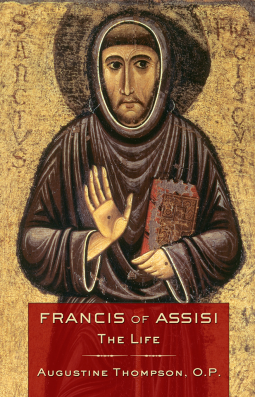 Francis of Assisi: The Life by Augustine Thompson is a comprehensive biography about one of the Catholic Church’s most beloved saints. Thompson earned is BA and MA at John Hopkins. He earned a second BA in Philosophy and a MDiv from Dominican School of Philosophy and Theology. His PhD is from the University of California, Berkeley. He has taught at several universities, published several book and articles.

St. Francis has quite a romanticized history. Pictures of him surrounded by small animals and a missionary of peace, kindness, and genteelness is how I remember him from my days in Catholic school. Thompson mentions some newer views of Francis:

“Francis was a free spirit, a wild religious genius, a kind of medieval hippie, misunderstood and then exploited by the”Medieval Church.” Or perhaps they know him as the man who spoke to animals, a nature mystic, an ecologist, a pacifist, a feminist, a voice for our time.”

Francis was born into a well off home, was educated, and quite a party guy. He went to war, fought, held as a prisoner, and was quite a changed man on his return. He was haunted by strange dreams and from the descriptions of his behavior sound much like post traumatic stress syndrome. Francis felt a great guilt and openly gave alms to the poor. He drifted from his family and displayed eccentric behavior. He began a life of poverty. He exchanged manual labor for food and shelter and worked with lepers. Along with two other penitents he went to Rome to ask to start an order. He managed to see the pope and was told to go on his quest see if he could bring in new followers. He spent his life dedicated to hard work, giving to the poor, and embracing the cross. Francis called this as leaving the world.

As far as the animals, Francis did have a way with them. There are numerous stores from before his sainthood that show a special connection, although not as great as his post sainthood stories. Interestingly, although he is known for releasing animals given to him and his circle for food, he had no prohibition against eating meat. Francis took the bible’s “Then let us eat what is put before us.” literally when it came to eating meat.

Thompson shows that Francis did exhibit some questionable behavior that would seem not too rational. Despite everything, Francis is dedicated to his mission. He would not accept money in exchange for his labor, only food or shelter. He does many things to show his faith and never waivers. Whether or not the reader is Catholic or Christian there is much to be learned and admired from St. Francis. Thompson writes an excellent biography and documents his work very well. It is quite an accomplishment to retrieve this much detailed information on a man who lived almost 1,200 years ago. A very good read for anyone interested in the Medieval Church, the Franciscan Order, or a story of a great man.