Book Review — Losing the Long Game: The False Promise of Regime Change in the Middle East 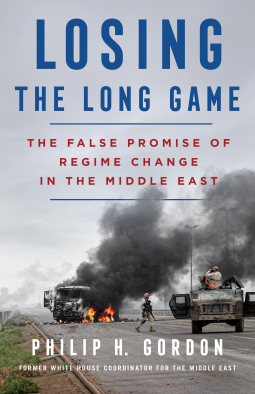 Losing the Long Game: The False Promise of Regime Change in the Middle East by Philip H. Gordon is a St. Martin Press publication.  Gordon is an American diplomat and foreign policy expert. From 2013 to 2015, Gordon served in the White House as Special Assistant to the President and White House Coordinator for the Middle East, North Africa, and the Persian Gulf Region. From 2009 to 2013, he served as Assistant Secretary of State for European and Eurasian Affairs.

In August 2007, a section of I-35 in Minneapolis collapsed into the Mississippi River, killing 13 people and injuring 145.  A commentator on the disaster said that part of the problem was that America was a great builder.  It took pride in building great works, but maintenance is rarely an afterthought.  This seems like an adept analogy for American regime change in other countries.  We will remove the regime but do little to establish a new system.  There are exceptions.  Installing the Shah as leader of Iran in 1953 and the overthrow of Allende in Chile in 1973 created decades of stable governments but under less than democratic rule.  Panama and Grenada proved to be mostly successful.

Gordon borrows from Tolstoy to make another analogy — every unsuccessful regime change is unsuccessful in its own way.  There is not a formula that fits regime change, and rarely one that provides positive results.  The First Gulf War stopped short of removing Hussein because it would have left a power vacuum.  There was no replacement government.  There was no one or group to assume power, and the country would soon fall under Iranian influence.  In the second war, we expected that the people would rise and greet us as liberators.  In fact, the vice president was quoted: “Now, I think things have gotten so bad inside Iraq, from the standpoint of the Iraqi people, my belief is we will, in fact, be greeted as liberators.” This was not to be the case.

Losing the Long Game studies regime change in Iran (1953), Afghanistan (1979-1992), Afghanistan (2001), Iraq (2003), Egypt (2011), Libya (2011), and Syria (2011).  The US involvement in the first Afghanistan conflict was by proxy to oust the Soviet government and support the resistance.  Here we helped create and empower our own enemies. That was by no means the plan.  America likes the easy part of overthrowing regimes.  We have the military power to do so with minimum loss of life on our part. When it comes to peacekeeping and nation-building, we shy away.  Although the loss of life in war is a terrible cost, there is a tolerance for it in public opinion as long as it is seen as a good fight or a battle against evil.  Death in peacekeeping or nation-building has little patience in public opinion.  Elected leaders feel the need to bring the troops back home as quickly and safely as possible.

After World War II, America stayed in Germany and Japan and kept the peace and allowed for nation-building.  Germany did have a background in elected governments, and the Soviet threat also created motivation for a stable government.  In Japan, we let the emperor live and allowed him to remain a ceremonial leader keeping the people united.  Douglas MacArthur drafted the new constitution, and its promise seemed to make us less of a hostile occupying force.  In both cases, we remained and, to some extent, still remain safeguarding their sovereignty.  We do not have that in the Middle East.  We are not liked and really never have been.

The US use of force in the Middle East is seen as interference and not as assistance.  These are lands that, in many places, are made up of competing tribes and factions held together by strong leadership.  In the absence of leadership, they do not just fold, they fight among themselves for power and create further instability. No two regimes are alike, and so far, we only recognize this in hindsight.  America’s policies in the Middle East and Near Asia remain a difficult situation.  Interference digs us a deeper hole. Non-intervention creates moral dilemmas and security issues.  We have the will to fight but not the will to rebuild.  We attack symptoms but ignore the cause.  An excellent book examining historical and current failures in diplomatic and military interventions.