Book Review: Every Hour, Every Atom: A Collection of Walt Whitman’s Early Notebooks and Fragments 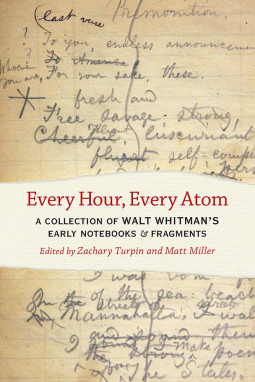 Every Hour, Every Atom: A Collection of Walt Whitman’s Early Notebooks and Fragments
by Walt Whitman and edited Matt Miller and Zachary Turpin. Miller is an Associate Professor of English at Yeshiva University’s Stern College. He holds a Ph.D. in English literature from the University of Iowa and an M.F.A. in creative writing from the Iowa Writers’ Workshop. Miller is a founding member of the Walt Whitman Initiative, an international collective bringing together all people interested in the life and work of Whitman, and currently serves on the board of directors. Turpin researches nineteenth-century periodical culture, digital humanities, textual recovery, and the history of epistemology and the sciences. His interests are in American poetry, particularly Walt Whitman. He has earned a Ph.D. in English Language and Literature from the  University of Houston.

The work presented is a collection of poetry and notes of Whitman’s early writing.  Turpin’s expertise in document recovery is particularly useful, as many of the pages have not aged well.  Even so, there are portions that are unreadable in the original.  The work is recreated in standard printed text with more modern editorial markings.  There is a legend for the editing markings.   Miller was one of the few responsible for digitally recording the original documents at the Library of Congress.  He and his group were among the last to touch the frail notebooks.

This collection presents what has been previously only seen by a few and presented in a very readable format. Every Hour, Every Atom is a book for fans and scholars of Whitman’s work.  These early works show the development of his poetry and his thinking.   As with many notes and drafts,  a great deal has been crossed out (but still readable) and abandon in final drafts.  An excellent collection with introductions by both editors. Although available both in paperback and ebook format, the paperback will allow for notes in the margins and a cleared look at the prints of the original text. Extremely well done.

One response to “Book Review: Every Hour, Every Atom: A Collection of Walt Whitman’s Early Notebooks and Fragments”