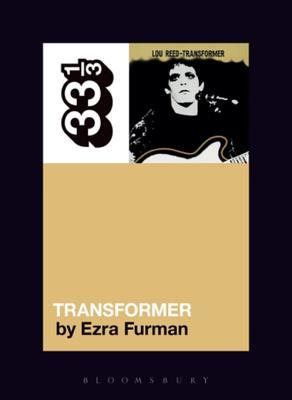 Lou Reed’s Transformer (33 1/3 series #131) by Ezra Furman is another edition to Bloomsbury Academic’s album series. Furman is an American musician and songwriter. He currently performs solo and tours with his band The Visions.

I remember hearing Lou Reed on AM radio shortly after Transformer was released. Of course, the song that got the airplay was “Walk on the Wild Side”. At that young age, I didn’t understand the lyrics but the song was catchy. The song would become another song like the Kinks’ “Lola”. Guys would sing along even after realizing the message. (To be fair, girls did the same thing with Meatloaf’s Paradise by the Dashboard Lights or The Knack for that matter). The battle over a cool song and a gay message was won out by the song. In case anyone missed the message, Reed repeats it with “Make Up” on the B side. At a time when gay was still criminalized Reed hid two songs in plain sight.

Furman’s interpretation of the album is interesting he manages to give it a Lou Reed review. It’s not the best rock album or the best album of 1972, he explains, it was ordinary music and it was like Reed, true to his form, didn’t give a f*ck. That is what makes this a great album according to Furman. Any serious look at the songs would find the same. “Andy’s Chest,” a tribute and olive branch to Warhol contains some of the most ridiculous lines:

Yesterday, Daisy Mae and Biff were grooving down the street
And just like in a movie, her hands became her feet
Her belly button was her mouth
Which meant she tasted what she’d speak
But the funny thing is what happened to her nose
It grew until it reached all of her toes
Now, when people say her feet smell, they mean her nose

and the bear lines that precede these makes one wonder what was Reed thinking? “Satellite of Love” also has interesting lyrics but more importantly it is playing along with his friend’s “Starman”. Bowie and Reed seemed to circle each other in music. Likewise “Perfect Day” in form with “Life on Mars.” “Perfect Day” also is interesting in that it has no violence of “Vicious” or open hidden meanings. It is mundane — a girl, the zoo, a movie, sangria. It’s very unReed like. Perhaps it falls in line with the Reed attitude — You want something more vicious or underground or counter culture? Well, you can have this instead.

Furman describes to the reader how this mix of music came to be such a great album despite what it is. He also details Reed’s and Bowie’s collaboration and explores Reed’s sexuality. It is not only a look at the Godfather of Punk but a look at Furman himself and what he sees as important and influential in his work.