Poetry Review — A Box of Longing with 50 Drawers: A Revisioning of the Preamble to the Constitution 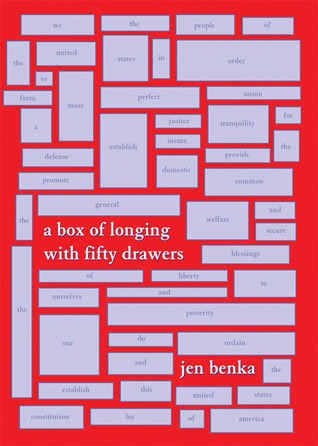 A Box of Longing with 50 Drawers: A Revisioning of the Preamble to the Constitution
by Jen Benka is a series of poems that use each word from the Preamble of the Constitution to trigger a poem about America’s promise and failure.  Benka is the executive director of the Academy of American Poets. She holds a BA in Journalism from Marquette University, an MFA in Creative Writing-Poetry from The New School and has been active in social change programs.

Taking the foundation of our country and the government created by the people, Benka breaks down the words of the preamble of the constitution into fifty-two poems.  The poems share a connection but can be read as stand-alone poems also.  Like a bow with fifty-two drawers, they are separate containers inside a larger container — much like a chest of drawers.

There is history in the writing from the founding of the country with its promise of freedom, but allowing slavery.  The battle to remain in the union and current visions of the country are included.  Some of the poems are short:

To stand alone together.

But still, pack a punch especially in the context of the book.  Others are longer but equally potent.  The third “And” poem displays the trap people fall into for idealized, but not perfect, youth in exploitation and regret.  “The” appears seven times in the Preamble and Benke does have a little trouble with the word as she progresses.  The sixth “The”

A well-done collection of interlocking poems reflecting on the very foundation of America.  History and promise of the future interlock and praise and criticism walk hand in hand.  An honest look at America with a message.