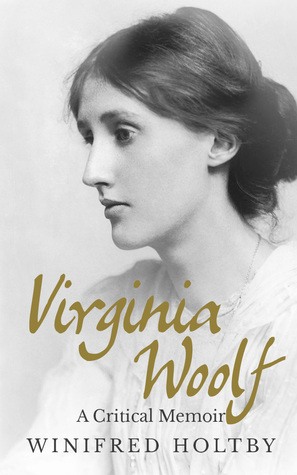 Virginia Woolf: A Critical Memoir by Winifred Holtby is a study of the interconnection of Woof and her characters and her style of writing. Holtby is best known for writing South Riding while dying of Bright’s disease. She was an ardent feminist, socialist and pacifist who published fourteen books before dying at thirty-seven.

This book is intriguing on several levels. First, it was written in 1932 while Woolf was still alive, and it concentrates on Woolf’s work and the interconnectedness of the stories and with Woolf’s own life. Although mentioned, Woolf’s depression does not play a major role in this book and it does in many current books. Not being formally educated in English literature, I found the critique well done, informative, and not heavy handed. The examples and passages in the book illustrate Holtby thesis well.

The use of water in Woolf’s life and in her books everything fromThe Voyage Out through The Waves (the last book written by Woolf before Holtby’s book) all contain water references and themes. In Woolf’s early memories of the beach at Cornwall and later tragically her death involved water. Water becomes ever present, but ever changing. It is always there; it rolls in and rolls out like the waves or life and death.

What may be more obvious to many is also brought up in Holtby’s critique is Woolf’s preferences in her novels. It is not surprising that Woolf didn’t much care for plots in her writing. Not a single one of her novels had a climax. In The Voyage Out, the South American jungle is nearly a copy of Sir Walter Raleigh’s Discovery of Guiana The plagiarism is Holtby explains is forgivable. The jungle setting was merely filler. In the South American town, surrounded by jungle, no wild animals are seen, in fact, nobody’s even bothered by a single mosquito. The hospital is conveniently located near the hotel. The setting is simply background to Woolf.

If it isn’t plot, climax, or setting that Woolf writes about, it must be characters. Woolf spends great detail in creating characters. Holtby compares the characters to other historical novel character’s just as Jane Austen. Also interesting is that characters that reflect Woolf’s life are the best done. She struggles when she writes characters out of her station. The other thing that separates Woolf is style. Many of her writings have almost a lyrical quality to them. This is perhaps the main reason I enjoy reading Woolf.

Holtby analyzes Woolf’s writing and works. She had a particular interest in “The Mark on the Wall” and uses it often in her comparisons. Her treatment of “Kew Gardens” is quite well done. For the reader of this book a knowledge of Woolf’s writing (up until 1932) is very helpful and almost necessary. Holtby uses each work as references and comparisons and builds her case. Without knowing Mrs. Ramsey, Clarissa Dalloway, or Jacob Flanders, the reader would be lost. An excellent read for anyone familiar with, or struggling with, any of Woolf’s work.

One response to “Book Review — Virginia Woolf: A Critical Memoir”