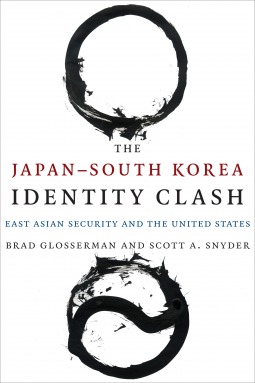 The Japan-South Korea Identity Clash: East Asian Security and the United States by Brad Glosserman and Scott A. Snyder is a study of the current East Asian international political environment. Glosserman is the executive director of Pacific Forum CSIS. Previously, he served on the editorial board of The Japan Times. His writing, commentary, and analysis on U.S. foreign policy and developments in Asia appear in publications around the world.Snyder is a senior fellow for Korea studies and director of the Program on US–Korea Policy at the Council on Foreign Relations. He writes regularly on issues in US–Korea relations and Northeast Asian politics and security for CFR’s Asia Unbound blog and for Forbes.com.

For those old enough to remember, the Cold War was a simpler time. For the most part countries fell into one of the two major camps — democratic capitalists or authoritarian socialists. This is a bit over-simplified description of the bipolar world but is adequate for general discussion. Many deep-seated local problems were overshadowed by the larger struggle of so-called capitalism versus communism. When communism fell the predicted peaceful world order did not come into being. Instead, new problems arose. Yugoslavia collapsed into a collection of warring factions. The two hundred and fifty ethnic identities of the former Soviet Union began exerting their claims for recognition, most notably Chechnya. The black and white system the past turned into a system of infinite grays.

In East Asia, Japan, South Korea, and China suddenly became a sensitive area for American policy and international policy. Japan in the twentieth century had been the aggressor in the region for a good portion of the century occupying both Korea and portions of China. In China, Japan was remembered for it atrocities. Korea and China have also had their struggles in the past. In the new century, China is now the second largest economy in the world surpassing Japan and divided Korea is growing with a standard of living rivaling Japan in the south. Japan believing that it has earned its position of influence in the world has been petitioning for a permanent position on the UN Security Council. Divided Korea suffers from not only division but the thinking that it is the small country in the mix. Complicating matters more is (China’s ally) North Korea’s aggressive behavior to both South Korea and Japan.

The Japan-South Korea Identity Clash offers current polling data on the populations of both South Korea and Japan concerning a variety of current issues. For example, the younger Korean generation is not as concerned about reunification as the older generation. They grew up under the current system and tend to accept it, possibly viewing reunification as diluting their standard of living. Both Japan and South Korea support the United States for their international security, but Japan does not want to live in a US type system. It prefers a European social democracy. Interesting patterns emerge as some Koreans believe US presence is responsible for the North Korean nuclear program and that the US presence may be causing problems with its relations with China.

The Japan-South Korea Identity Clash provides a detailed study of the regions growing and changing concerns. Japan and Korea share historic problems between their nations some that Japan merely wishes to forget and the same that Korea demands an apology. In the region of three powerful economies, there are deep tensions under the surface. America has been the traditional protector and moderating effect as an ally to both Japan and Korea. With the rise of China, maturing democracies, a young voting generation that does not see or remember the Cold War, there are new trends in political and social behavior that are developing in this region. This is a timely and informative study involving the three largest economies in the world along with the eleventh largest or about half the entire world’s GDP.