Assault From the Sky: U.S. Marine Corps Helicopter Operations in Vietnam by Dick Camp is a comprehensive history of Marine Corps’ helicopter operations in Vietnam from 1962 through 1975. Camp, Colonel Camp USMC retired, is the author of several books on the combat history of the US Marines. His books cover World War I to Fallujah. Camp served as a company commander at Khe Sanh and retired in 1988. He is currently the Vice President for Museum Operations at the National Museum of the Marine Corps.

During the thirteen years of the Marine Corps’ involvement in Vietnam, over four hundred helicopters were lost along with eight hundred Marines either as crew or passengers. Each chapter of the book contains the citations of medals earned by Marines in helicopter missions. Descriptions of heroism fill the book. Numerous Silver Stars, Bronze Stars, Naval Commendation Medals, and even a few Medals of Honor.

In the first section of the book, Buildup 1962-1966, Marines begin their involvement in Vietnam. Marines started transporting South Vietnamese troops in 1962 in UH-34 helicopters. Helicopters that the army considered out of date and no longer used. The Marines used these helicopters with distinction. Marines, although not in direct combat, still needed to defend their air bases from Vietnamese sappers — Company sized units armed with explosives and grenades lead organized attacks against the bases and helicopters.

In the second section, Heavy Combat 1967-1969, Marines are involved in combat, transporting troops, and picking up wounded. Marines again demonstrate the highest traditions of the Corps. Flying into danger to rescue wounded and trapped Marines became common practice for the Marine helicopter crews. Actions at Khe Sanh are covered in detail.

In the final section of the book, The Bitter End 1975, Marines are involved in the evacuation of Americans from Vietnam. In the previous section I ran across the name Lt. Colonel Richard E. Carey as he described the Super Gaggle and what made it a success. In this section Colonel Carey is referred to as Brigadier General Carey and plays an important role in the evacuation of Vietnam.

I met General Carey a year ago. He happened to stop at the bicycle shop where I work. Carey was my commanding general when I was at Quantico. We talked for a bit about Quantico and the Marine Corps Marathon and it was quite a bit different talking to the general now then it was 30 years ago when I had been a private fresh out of Parris Island standing in a CG inspection. He had an outstanding career and it is even more remarkable the role he played in the evacuation of Vietnam.

Assault From the Sky is an excellent history of the Marine Corps’ helicopter missions in Vietnam. The book is very well cited in the text and in the bibliography. Information comes from published sources, units records, and personal interviews. Camp does an excellent job of presenting the strategic history as well as the views of the Marines who were actually there. This is an outstanding book for readers interested in Vietnam, military aviation, or the Marine Corps. 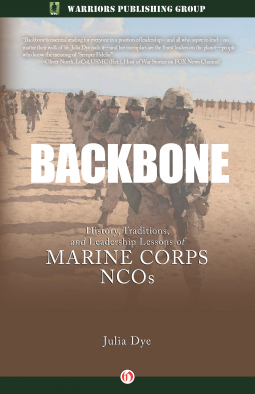 “We sleep safely in our beds because rough men stand ready in the night to visit violence on those who would do us harm.” – George Orwell (attributed)

Backbone: History, Traditions, and Leadership Lessons of Marine Corps NCOs by Julia Dye is a history lesson of Marine Corps leadership shown by the actions of its Non Commissioned Officers. Dye earned a PhD in Hopology, the anthropology of human conflict. She is a partner in the consulting firm of Warriors, Inc and has worked as a weapons master in and trainer for the movie Alexander. She also oversaw historical accuracy in the HBO series The Pacific

“In the Navy, Sailors wear rating badges that identify their jobs. A Soldier wears branch of service insignia on his collar, with a metal shoulder pins and cloth sleeve patches to identify his unit. Marines, on the other hand, wear only the Eagle, Globe, and Anchor their ribbons, and their marksmanship badges. Just by looking at the uniform you cannot tell what they do each day, nor the unit which they belong. A Marine may drive and AmTrac, program computers, or fly helicopters. The tasks are unimportant. What is important is that the Marine is a Marine.” (page 8)

Marines are different; we are trained to be that way. The Marines have the lowest ratio of officers to enlisted men of the American services. The additional leadership comes from the Non Commissioned Officers (NCOs), the backbone of the Marine Corps: Corporals and the various ranks of sergeants. Attaining the rank of Corporal a Marine is in a leadership position; it actually means something. There is no need for a piece of felt under your rank insignia to show that you are in a leadership position. Dye uses the 14 Leadership Traits to designate each chapter of the book. Marines learn these traits in boot camp. Why does a Marine in boot camp need to learn about leadership he is the lowest ranking member of the Marines? Even as a private, a Marine may find himself in a leadership position by default; Marine Corps history is filled with examples. Being prepared for it is a very good thing.

Dye delivers a history of excellence. The forward opens with the Marine NCO Creed. Marines portrayed in the book are all real from Dan Daley the Marines that boarded Magellan Star rescuing the ship and crew from Somali pirates. Some of the Marines I recall from Marine Corps history like Dan Daly and Leland Diamond. Some are civilians and and relate how being a Marine helped them, such as Terry Anderson. Terry Anderson was captured by Hezbollah and held hostage for more than six years in Lebanon in the 1980s. He explains how the Marine training helped him survive and gain leverage on his captors. Many of the stories, however, are from combat experiences.

Marines portrayed in Backbone are far from perfect some went up and down the ranks. Some were offered commissions they all refused except for one. Many left the Marine Corps and went into the business world. Dye shows how the traits that made successful Marines translates to success in the business world. Overall the book is about leadership. Leadership works the same in the military as it does in the civilian world. The difference is that in the Marine Corps, poor leaders do not last.

I when I first saw this book I knew I wanted to read it. I served in the Marines in the 1980s and earned the rank of Corporal (twice), so my opinion might be a bit biased, but remember Marines have integrity. In the acknowledgments I saw her note to her husband Captain Dale Dye, USMC, Retired. My first thought was “Oh, a book on NCOs by an officer’s wife, too bad.” I was completely wrong in my initial thoughts. Julia Dye does an outstanding job with Backbone and does an excellent job of not only capturing the history, but also the spirit of the Marine Corps and Non Commissioned Officers. She offers an more than adequate bibliography of cited works and interviews. I was so impressed with the book that I shared several quotes with friends including Marines I served with. I highly recommend this book to Marines and everyone else. Semper Fi