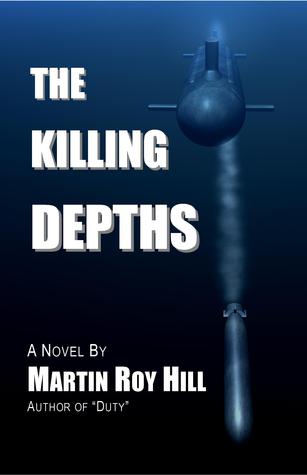 The Killing Depths by Martin Roy Hill is a military mystery novel set in an American submarine. Hill has a long history as a reporter and editor for newspapers and magazines before he became a military analyst. He is a sixteen year veteran of the US Navy and Coast Guard. Hill has also written several short stories and novels many earning recognition.

Initially The Killing Depths appealed to me because it takes place on a submarine. As a former Marine I know a bit of naval traditions and the day to day life in the naval service. However, except for a visit to the USS Nautilus museum, I have never been close to a submarine. Secondly, the (still fictional) idea of women serving on an attack submarine seemed to be a historic landmark; women being allowed to enter into the last “men only club” in the military. The novel coincidentally fell into my hands shortly after the Marine Corps graduated the first two enlisted women from Infantry School, since then ten more women have graduated. Considering recent events, having women serve on the attack submarine Encinitas suddenly did not seem so far fetched. The story also involves the North Koreans and the Iranians in a plausible real world scenario.

The USS Encinitas has a problem. A female sailor who was thought to have committed suicide on the submarine is found to have been murdered. NCIS Agent Linus Schag is airlifted to the sub in mid-mission to solve the murder. The Executive Officer Paul Culver is surprised to see his former classmate, Schag. Captain Johnson is less pleased. First having to surface in mid-mission and second he too knows Schag and is not happy to see him officially or unofficially. These three men have a history that the reader will begin to understand as the story evolves.
Hill also weaves relevant naval history into the story. The incident with the USS Iowa and the fiasco of the investigation concerning the torrent explosion in 1989 is mentioned more than once. The USS Thresher and Scorpion disasters are also mentioned. Life on a submarine and problems of living on the sub are covered for the general reader. This allows the reader the basic understanding of living life underwater in a metal tube: dealing with stale air, no privacy, monotonous food, and claustrophobia. The added challenges of integrating women into the crew is explained from living in cramped quarters to segregating sleeping areas.

Schag begins his investigation in a hostile environment. No one wants to believe there is a killer among those in this close knit crew, and no one appreciates the intrusion. On a submarine you need to count on every member to pull their weight. The idea of a killer in the mix is unthinkable until there is another murder. Finding the killer is no easy task. The crew and officers are defensive and do not appreciate the disruption in their mission. The Captain Johnson is unyielding in keeping to his mission: sinking the former Soviet Charlie class submarine, the Crescent Moon. The Crescent Moon has been refitted and armed by the North Koreans and purchased by Iran. The captain’s orders are clear sink the sub at all costs. The captain is in a tough position of needing to complete his mission and saving his crew from what appears to be a serial killer on his submarine.

The friction between the characters against the back drop of completing the mission or safety of the crew makes for a great story. Limiting the scope of the story to the submarine and its very limited ability to communicate to the outside world without compromising its location or mission adds to the challenge. More than a military story, more than a mystery, and more than a thriller, Hill weaves together all three in an exciting story that will keep you in suspense through out the book. The twin stories of a possible serial killer and the mission to destroy the Crescent Moon make for excellent reading. I have a hard time remembering the last time I got this caught up in a thriller. I was even more so surprised to see that it is independently published. The quality of the book and the story is outstanding