Book Review: The Collapse of Western Civilization: A View from the Future 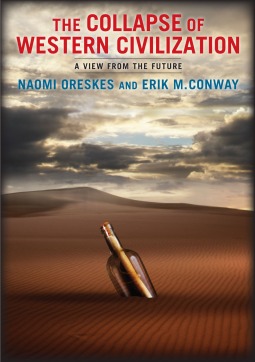 The Collapse of Western Civilization: A View from the Future by Naomi Oreskes and Erik Conway is a look back at the planet earth from the year 2393. Oreskes is the professor of History of Science at Harvard and previously served as professor of history and social sciences at the University of California San Diego. She holds a PhD in Geological Research and History of Science from Sanford University. In addition to the a great number of professional papers, she is also the author of Merchants of Doubt

How will history look back at the latter half of the twentieth century and the beginning half of the twenty-first century? How will the future look on what we are doing today? The answer is not very favorable. Oreskes takes a look at civilization and the how we got where we are today by playing a thought game. What would a researcher in 2393 find when studying the century spanning roughly from 1950 to 2050?

To put things into perspective, I studied history as an undergraduate in the 1990s. To look back 400 years into the past as Oreskes is doing, we need to see what the was world like 400 years ago. In America, Jamestown was being settled and the first African slaves are being brought to British North America. In Europe, Galileo is forced to recant. In the British Islands, the English Civil War is being fought, and John Napier is inventing logarithms. Things look rather backward from today’s standard. But, at the same time it must be remembered that people are acting as they best saw fit. Even still, man should have been smart enough to know enslaving people was wrong and that the church should not dictate to science, but then man does something he does quite well; he rationalizes.

Today we have that same rationalization process, but our rationalizations have a far more serious effect on the entire planet. The warning signs are all around us, changing weather patterns, rising CO2 levels, glaciers and ice retreating, and species being threatened with extinction. We rationalize though. We have independent sounding think tanks tell us that it’s just normal change. What those think tanks don’t tell us is who funds them: those who have an interest in selling the very things causing climate change.

The first part of the book is filled with information that is all around us that we refuse to see. From 1761 through 2012, 365 billion tons of carbon dioxide have been released into the atmosphere. Half of that 365 billion tons has been released since the mid-1970s. The 1970s, we as a people, believed that the best way to deal with pollution was to dilute it. Soon taller smoke stacks were built to help spread the pollution away from the local area, but there is only so much dilution before you reach saturation.

The future did not have all the answers either, Attempts to correct the problems sometimes increased the damage. The look back did show some current examples, like natural gas. Using cleaner burning natural gas (fracking), as a clean alternative to coal would have helped. But rather than using natural gas to replace coal we use it in addition to coal.

An interesting study of political philosophy is included. Western thought from Classical Liberalism and Neoliberalism (conservatism in the US, Friedman and Hayek), which viewed individual rights and economic freedom as ideals, contributed to the problem. Unregulated industry and the idea that government is not the solution, but the problem contributes to burning through of resources without regard to the consequences. Communism is not the answer either; it proved its failure quicker than its opponent’s. The political tie in is important and interesting because it shows how we got to where we are and why we are choosing to do nothing about it.

The book concludes with Conway interviewing Oreskes. The Collapse of Western Civilization is sure to stir up some controversy and meet harsh resistance, much like Galileo did. Climate change remains a hotly debated subject in America, but, then so does evolution. I think we in the West refuse to see the writing on the wall. We want to use our resume as proof that we are right. We won the cold war. We create technology. We have a powerful military. We enjoy a very high standard of living. We cannot be wrong. Thirty years ago the adult population could ignore what we are doing to the planet. Chances are they would not live to see a catastrophe. But as we continue to burn through resources at an increasing pace with little regard to the consequences, that catastrophe moves closer and closer to the current generations. One day it will be here, and then nothing will stop it.

Book Review: Farewell to Reality: How Modern Physics has Betrayed the Search for Scientific Truth

Farewell to Reality: How Modern Physics has Betrayed the Search for Scientific Truth, by Jim Baggott is a criticism of modern theoretical physics. Baggot is currently a freelance science writer. A graduate of Manchester with a degree in chemistry and a PhD in physical chemistry from Oxford he was a lecturer at the University of Reading. He is the author of several books on quantum physics and reality.

There has been an explosion in Physics for the common man, or at least the lay person that chooses to follow. I was working on an electronics degree in the mid 1980s and I came across a copy of Taking the Quantum Leap by Fred Alan Wolf. I was amazed at book about quantum physics that I could follow. Earlier I picked up a book on String Theory and I was thoroughly discouraged as the book was entirely mathematical equations. Times changed for the better. Hawking’s A Brief History of Timemade physics popular again. But is popular good?

Since then the Discovery Channel and the Science Channel have kept the general public up to date and interested. It’s is actually surprising how many people actually knew something out the Higgs particle last year. Documentaries covering physics, reality, time, and quantum mechanics are all readily available and constantly updated. The concept of multiple universes even made its way to prime time television as the science fiction show “Sliders”.

Baggott writes a clear introduction with a list of items he would like the reader to think about and follow along with as they read the book. He traces science from the observable to the purely mathematical. Along the way he explains the corrections made to theories and scientific thought. The idea of what is reality comes into play and does science actually describe reality. Reality can be a matter of perspective. Plato’s cave allegory is an excellent example of reality. From the prisoners view, the shadowy images are reality yet for everyone else it is not. Einstein introduced the world to the idea that time and space were not constant, only the speed of light is constant. Numerous thought experiments were made, but still, empirical observation supported these predictions. Relativity was, and is, difficult but, all in all, not mind blowing. The Standard Model again is difficult, but has a beauty in it: symmetry of particles. Then came the discovery of more particles and the need to explain them, Super Symmetry, Sting Theory, additional dimensions, Multiverses. We have gone from elegant and empirical to seemingly impossibly complex and untestable. Just because mathematics can provide a solution, is it necessarily the right right solution; more importantly which of the several mathematical conclusions is right…if any?

There comes a point when science loses touch with empirical world. Baggott uses the term fairy tale. Opponents would counter, “Here is the mathematics to prove it.” Baggott uses the term metaphysical to describe where science is headed. I can see the direct relation to what he is say. Without empirical data or proof, what separates science from metaphysics or religion? Modern physics seems to have abandoned the scientific method and pursued unobservable, untestable, and unfalsifiable science: fairy tale. Perhaps it’s the popular science selling itself to the mass market, where popular is better selling than factual. Selling the idea on a holographic universe is more profitable than being right. Has sensationalism taken over modern science? Baggott gives his views in this book.

Farewell to Reality is doing for science what Zealot is doing for religion. It is setting up a challenge and creating controversy. Baggott’s book is a bit deeper than popular science books like A Brief History of Time. Rather than fame or fortune Baggot wants to save science. He presents a clear and well written book. The book is well cited and almost 40 pages of documentation are provided. Farewell to Reality is an excellent book for the science minded. It may be a bit difficult for those without a science or a physics background.