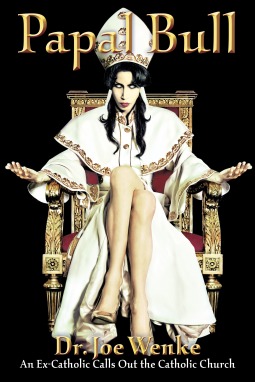 A word of warning: This book is not for everyone. Some will find it very offensive. But get real. Papal Bull is a play on Papal Bulla. Bulla being the seal used on a formal announcement of policy from the pope. They are commonly know as “bulls.” A Papal Bull by Alexander VI divided South America between Portugal and Spain (Alexander was from Spain, so you know who got the better deal). Secondly, the cover art features a transsexual dressed as the pope. That sets the tone for the book. For some reason, I kept falling into a George Carlin voice as I read the book.

In his preface, I could relate to many points Wenke makes about growing up Catholic. Large families and not enough room to live in. Public schools were not acceptable and although not well off there was always money to go to Catholic school. (I had to get a paper route to pay my way through school, even though I would have preferred J.B. Hart and South High). Of course there were the nuns and their system of discipline. I could also relate to the quality of the education. I don’t think we ever got through a single text book in the five years I went to Catholic school. We did get in plenty of prayer time, church time, preparation for the sacraments. It seemed like I lived a parallel life with the author.

Wenke shows that there is quite a bit of Bull in the Catholic church. He takes a realistic look at the history of the church from the crusades to the popes and anti-popes. The first thirty-five popes became saints including the anti-pope Hippolytus. The church has a long history of saints, both real and imagined. There is a whole section of events and people called “According to Tradition ….Legend has it.”

Doctrine is examined. Wenke has some questions for God come judgment day. Why does God need to be constantly worshiped? There is no such thing as freewill if God is omnipotent, so any personal failings are are God’s fault not yours. God knew your whole life path before you or even the universe existed. Why are we held bound to Adam and Eve’s sin (mostly Eve’s fault according to the church) until a priest pours water on us and says magical words. What about a baby who dies before being baptized? Purgatory is invented for that and for people who need to get punished a bit before going to heaven. There is also the story of Joey and a baloney sandwich and a partial lists of common sins that will bar your way to heaven.

If you are a former Catholic you will probably love this book especially if you were brought up in the latter half of the twentieth century. The satire is heavy. You’ll laugh and probably say “Huh!?!” several times through this book. Although Wenke offers his personal opinions on the Church, the historical information is documented. For some this will be a fun read, for others eye-opening, and yet still for others kindling. I enjoyed the book and am a little sad that George Carlin isn’t around to read the the audiobook version.

“How consoling it is for me to know that, all over the world there are millions of people who, five times a day, bow down before God.” Pope Pius XII

What Does Islam Mean in Today’s World: Religion, Politics, Spirituality By William Stoddart is an examination of Islam and a comparison to other religions. Stoddart was born in southern Scotland in 1925. He studied language and later earned a medical degree. He has translated many works into English and was assistant editor to the British journal Studies in Comparative Religion. Soddart is considered one of the most important writers on Perennial Philosophy.

In What Does Islam Mean Soddart attempts give an unbiased opinion of Islam. He shows that Islam historically had made exceptions for “people of the book” – Christians and Jews and to some extent Hinduism. In 1097 when the crusaders took Jerusalem they killed all the people in the city, Jews, Muslims, Non-Catholic Christians: men women and children. When Saladin’s troops entered Jerusalem no one was killed. Catholics were given safe passage out of the city and Jews ans Eastern Catholics stayed. Hindus, Buddhists, Native Americans all had their episodes of violence. Christianity has changed in modern times. It has become more humanist and its growing indifference had lead to the toleration of other religions.

The indifference has spread to the treatment of women. The Bible, Old and New Testament, allow for rather harsh treatment women, even when compared to Islam today. Polygamy in Islam is brought by Christians while ignoring King David, King Solomon, and prophets had more, some many more than one wife.

What does religion mean. Many say Christianity means, democracy, all men are created equal, free press, modern science (except for evolution and the Big Bang), and peace. All are incorrect. “I come not to bring peace but the sword.” are words attributed to Jesus and not Mohamed (Mathew 34:10). Islam is not a monolithic religion. It has it zealots like the Wahhabists of Saudi Arabia, revolutionaries of Iran, Secularist in Iraq and what can be called ordinary Muslims like the former King of Jordan or the worshipers of the mosque on the corner of my street.

Soddart tries to explain Islam from a neutral point. I think he succeeds, but many Christians and Muslims will disagree. Just like Catholics and Pentecostals or Sunni and Shiite won’t agree. For those with an open mind and a willingness to listen (or read), this short book provides much insight. The author attempts to provide some neutral information in the wake of September 11th and help set the record straight.

Book Review: Zealot: The Life and Times of Jesus of Nazareth

Zealot: The Life and Times of Jesus of Nazareth by Reza Aslan is a study of the historical Jesus and the Jewish people and their relationship with the Romans. Rez Aslan is an Iranian-American writer and is on the faculty of University of California, Riverside. He came to America in 1979 with his parents who were fleeing the Iranian Revolution. Aslan holds a BA in Religions, a Masters in Theology in from Harvard Divinity, and a PhD in Sociology of Religions from UC, Santa Barbara. He is well published in newspapers and has made numerous appearances on television and radio. He has also written several books on religion.

Warning: This book and this review is not for everyone. I can see how some would be offended by the contents of this book and for that matter this review. Aslan writes about the historic Jesus and not the divine Jesus. He places events in their historical context, examines the original language texts, and compares it to Hebrew scriptures. The Gospels are compared for content and for the time period they were written.

Aslan provides a good history of the Jewish people and the Roman occupations. Pontius Pilate who had a great dislike of the Jews. He wold never release a prisoner for Passover, and it is unlikely that he would have given any personal attention, let alone a trial for a Jew accused of treason. Death sentences were carried out regularly without much more thought the a stroke of a pen. If there was to be a question asked of Pilate it would be “Are you the King of the Jews? “ King of the Jews was a political title, Herod held that title. For someone not appointed by Rome to take that title would be considered treason against the Roman Empire.

Zealot challenges many ideas and words that have been misrepresented through history. Jesus was a Nazarene; he was not born in Bethlehem. Only Mathew and Luke place Jesus’ birth in Bethlehem, but consistently refer to him as a Nazarene. The census that supposedly brought Jesus’ family to Bethlehem was a fabrication to tie Jesus to the House of David. Rome would not shut down its entire economy for weeks or months so that people could return to their birthplaces and wait to be counted. People were counted where they held property so that their taxes could be assessed, not in their birthplaces.

Paul is also covered in the book and his rise to prominence over James the Just, brother of Jesus. Paul is shown to do his own thing and ignore many of the teachings of Jesus. In fact his only mention Jesus life is the crucifixion, resurrection and the Last Supper. Paul appoints himself as the 13th apostle and he is the one who breaks with the Old Testament teachings much to the astonishment of the twelve apostles.

It’s not that Aslan is trying  destroy Christian beliefs. He looks at the events strictly as a historian. He covers a great deal of ground inZealot. Temple history and practices are covered as are the Romans and Roman Law. Healing, purification, and the many messiahs that existed before Jesus are also covered. Very little in first century Holy Land is left unexamined.

Zealot will make you rethink what you know about the New Testament and Jesus. Alslan writes a very well thought out book and a very well supported book. He includes over seventy pages of documentation to back up his claims, and that support is needed on such a sensitive subject. It is an very informative book for any reader with an open mind and willing to look at history. I highly recommend the book.

For those posting comments:

2) Your personal religious beliefs are your own.  They do not belong here and will not be approved unless, you have a book detailing your religious beliefs.  Then I would be more than happy to review it.  Send me a copy along with your academic credentials.

3) Post concerning material in the book or my review are always welcome.

And finally, Thank You to the hundreds of people who took the time to read my review.

Book Review: The Myth of a Christian Nation

I was waiting on Boyd to back track on his position, but he never did. He uses the Bible, quotes attributed to Jesus and the apostles, to make his points on nonviolence, silencing the “take America back” argument, Christians wanting political power, and what to do with the “evils” of homosexual marriage and other social issues.