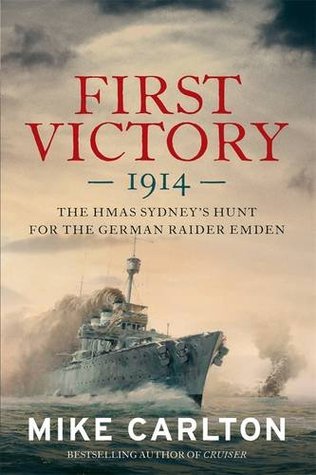 First Victory 1914: The Hunt for the German Raider Emden by Mike Carlton is a history of WWI in the South Pacific and Indian Ocean. Carlton is a forty year veteran of radio and television news and current events reporting. He was an Australian Broadcast Corporation (ABC) Vietnam correspondent during the war. He later served in London, Jakarta, and New York. A long time naval historian this is his fifth book and second on the Australian navy.

I think of myself as fairly well read and educated on WWI . I have a pile of WWI books and remember most of my history classes in college and grad school. One thing I remember clearly from 20th Century History was about WWI. Dr. Smith covered the class and said although there was a huge naval race between Britain and Germany, the Battle of Jutland was the only real naval activity (aside from submarine warfare) in the war and it wasn’t worth putting too much time into because it was essentially fought to a draw. Living in both the Northern and Western hemisphere seems to have a dramatic effect on our world view. I do recall Australia’s efforts in WWI, but it seemed those efforts were to be filler for the British lines along with troops from Canada, India, and other countries in the empire and commonwealth. Little did I realize there was quite some activity outside of the European theater.

Australia was ready to do its part in providing its own protection at the turn of the 20th century. This proved to be a benefit for Britain and its Two Power Rule. Britain’s fleet would remain the combined size or greater than the next two most powerful navies in Europe. The German naval race was putting pressure on Britain’s superiority. The British decided it was better not to send ships to Australia because they would be put to better use in protecting Britain. If Britain should fall what good would a few ships do to protect all of Australia. If Australia falls and Britain eventually wins, Australia would be free at the end of the hostilities. Although Britain valued the almost £ 23 million of wool and nearly £ 15 million in gold from Australia, protecting it at the expense of the British homeland was not in the plans.

Australia did have fears of it’s own. Germany, looking to expand its small Empire, was moving into the South Pacific looking for territory. Australia was also worried about Japanese interests in the area. Britain chose to nullify the powerful Japanese naval threat with a treaty. German New Guinea and particularly the German port of Tsingtao, China remained threats for Australia. The outbreak of war put Germany a difficult spot in the Pacific. Having only a small fleet in the area, the German plan was to head East to Chile for supplies and a friendly port as there were no longer a safe port for the German fleet in the Indian or Western Pacific Oceans. Von Spee, said that one ship should stay behind and fight. There was no way a fleet in Chile would be able to respond or effectively fight. The plan was approved, knowing the ship left behind would probably not last the war before running out of supplies or meeting the British fleet. It was decided Von Spee and the Emden would remain behind.

The Emden very quickly made a reputation as a raider. Carlton calls it piracy legalized by war. Ships carrying contraband to belligerent nations were open prey for riding and sinking. Von Spee followed the rules of war and no one from the ships he raided or captured complained about their treatment. In fact he was well known for taking care of crews and passengers of ships he captured. He had quite a reputation as a gentleman until the end. The Emden, nonetheless, became the target of the Australian Royal Navy.

Although initially opposed to Australia taking any action against German holdings, Britain eventually reversed it decision with the stipulation that any territory captured would belong to Britain and not Australia. Britain saw the need for possible bargaining chips at the war’s end. Australia would man its navy and build an army for the benefit of Britain. Although many would find that position rather subservient, Australia was at a transition point. Many of the people considered themselves as members of the British Empire, more so than Australians. The six Australian colonies became a federation became a Commonwealth in 1901. Independence from British rule was still new. There was still loyalty to the mother country but a sense of pride as a nation and a need to prove itself.

First Victory contains a wealth of information not only a very important part of Australian history, but world history. In the northern hemisphere, not many people are aware of the war in the Southern hemisphere and Indian Ocean. Next year marks the 100th anniversary of the start of World War I and it is quite an important anniversary for the people of Australia. As a veteran myself, I take time and honor Remembrance Day or as it is called in America Veteran’s Day. We tend to forget in America. Veterans Day is no longer a holiday for most Americans, veterans included. While people in other country’s remember, their service members, Americans would rather put a Chinese made “We Support the Troops” magnets on their foreign SUVs, powered by imported petroleum than make a serious effort to remember. We are very much symbolism over substance here. This is a very enlightening book and a history that reads like an action/adventure story. Truly a remarkable read and recommended for anyone interested in naval or WWI history.

The Australian War Memorial in Canberra records that 61,720 died and 137,013 were wounded or gassed.

I would like to thank Random House Australia for making an advance copy of this book available for review in the United States. For Americans reading this, Veterans Day is two days away and please take a moment to member all those serving and all those who have served.