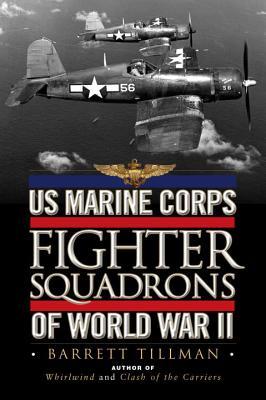 US Marine Corps Fighter Squadrons of WWII by Barrett Tillman is the history of Marine Aviation in the Pacific. Tillman a University of Oregon graduate with a BA in journalism. Much to my surprise Tillman was not in the Marines, rather a writer with a passion for military aviation. First, I am a former Marine so my biases are already set in stone. Tillman writes a history any Marine would be proud of…except maybe Pappy Boyington. Tillman is critical of the Black Sheep myth, and it seems justified in his research. There is praise for the Marines throughout the book. Charles Lindbergh (a Colonel in the Army refused active duty status by the Roosevelt Administration) trained with Marine Air Group -31 and said of them, “The more I see of the Marines the more I like them.” MacArthur’s famous “I shall return” was followed up with, “With the help of God and a few Marines MacArthur returned to the Philippines.” One of the two most well known fighter groups are discussed: The Black Sheep Squadron. The other is mentioned Rickenbacker’s Hat in the Ring 94th Fighter Squadron of World War I. Both Boyington and Rickenbacker may have embellished their stories, both men were very effective leaders, even if Boyington is (correctly) referred to as a functional alcoholic. Boyington however still fits well in the Marine Corps Pantheon. Tillman does an excellent job detailing the aircraft, the evolution of Marine aviation, and the Marine aviation’s role in the war. He covers the history of each unit in the war to include nicknames, deployments, planes, aerial combat record top fliers, and a narrative. Some of the nicknames are very Marine like the Devil Dogs, Joe’s Jokers, Wolfpack, and Whistling Devils. VMF-122 was originally designated Candystripers, but later redesignated the Werewolves. I am not sure if the original name was to give the enemy a false sense of security, or its commander was one some higher ups “list.”Brief biographies of aces are given toward the end of the book. There are two collections of photographs in the book. The first contains pilots and the planes. The second contains the various patches for the Maine units. There is also a detailed bibliography and index. US Marine Fighter Squadron does the history of the Marines proud. These are the heroes that define Air Wing of the Marine Corps. Dedicated, hard charging men, who faced an enemy and fought to win. Does Boyington’s hard partying take from the image? No, it’s part of the Marine Corps… the service that was born in Tun Tavern. Although the majority of the book does not deal with The Black Sheep Squadron, they are the most recognizable. The Marine Corps has a very detailed history with plenty of brave men whose records are brought out by Tillman. Extremely well done.