Once Mao Tse-tung’s thought is grasped by the broad masses, it becomes a source of strength and a spiritual atom bomb of infinite power. ~ Lin Biao 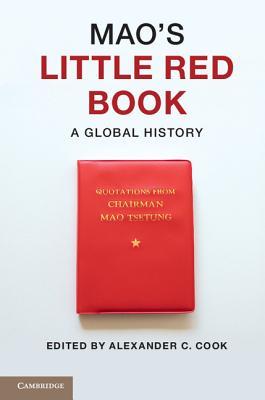 Alexander C. Cook has put together a great book about the second most read book in the world. The Quotations of Chairman Mao, or simply Mao’s Little Red Book, took the world by storm and created fans as well as enemies. Cook put together the a collection of scholarly essays from experienced scholars in this extremely well documented book. The amount of documentation and citations is well above and beyond what I would have expected. The writing is clear, to the point, and gives a variety of viewpoints.

Mao’s quotations on revolution and socialism may seem dated to many casual readers or those without a history or political science background. But it must be remembered that the world was a very different place fifty years ago. Fifty years may not seem like a great deal of time, but a great deal of change happens over a fifty year period. Consider that World War II and the Desert Storm were fifty years apart and think of the changes weapons, technology, and economies.

Mao’s Little Red Book covers the effect it had in China and around the world. The Little Red Book was originally intended for the People’s Army as a tool to keep moral, dedication, and the revolutionary spirit live and well. The demand from the public for a copy was overwhelming. The printing office needed to outsource the production of the book to try and keep up with the demand. Having a copy was a sign of pride and duty for the average citizen. It was quoted and brought up even in casual conversations. It did create a cult of Mao though. That may seem strange and on par with the Kim Il dynasty in North Korea, but it was not that odd in China. Collected quotes had a long history in Chinese culture going back to the Confucius.

The book was taken in different ways throughout the world. Originally not intended for outside use, even to the point of Chinese officials asking that visitors return any copies of The Little Red Book that they may have. The government felt that outsiders would not get the proper message in context by reading the small sampling and urged interested people to instead read the more complete volumes. China did print The Little Red Book in a few languages, and then more including Swahili. The Swahili edition was published for Tanzania and made available at a very low cost. The problem there, however, even with the support the government, was with the people. High illiteracy rates made even a very inexpensive book almost useless. This was fixed with broadcasts of from Radio Peking in East Africa.

The book although widely popular in many parts of the world was a complete flop in the Soviet Union. China and the USSR had a difference of opinion that sometimes lead to bloodshed. China saw revolution as active and the USSR believed it achieved all there was. Mao said the Soviet Union lost its way with industrialization; the people no longer poor or agrarian had lost touch with the revolution. The book also was not a hit in the Western Hemisphere. In America, outside of Berkeley and the Black Panthers, it had little effect. Although South and Latin America had more than their share of communist influence, it was mostly from Moscow. The exception, however, was on of the most well known revolutionary/terror groups in the Western Hemisphere: The Shining Path.

The use of different scholars and different regional expertise gives Mao’s Little Red Book: A Global History far more range, coverage, and grasp on how Mao’s little book influenced the world and where it succeeded and where it failed and more importantly why. The book may be above the grasp of the causal history reader, but well worth the read to those with an interest and a background. It is probably one of the more heavily documented books I have read outside of graduate school. Footnotes take up significantly more space than most mass marketed nonfiction books usually use. An excellent scholarly examination.