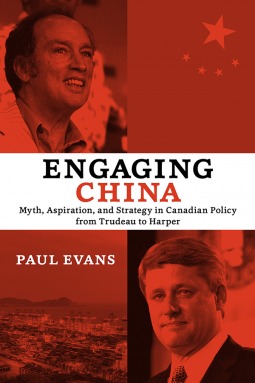 Engaging China: Myth, Aspiration, and Strategy in Canadian Policy from Trudeau to Harper by Paul Evans is the history of Canadian-Chinese relations over the last forty years. Evans is a professor at the University of British Columbia and currently teaches the Masters of Arts in Asian Pacific Policies Studies. He has an impressive academic history and is well published in his field.

I chose this book primarily because of my background in international relations and wanted to compare United States policy, which I studied, to Canadian policy: Neighboring countries with a very similar background and heritage, but with different priorities in world affairs. For many Americans, this is an important book to read. Far too many Americans think of Canada as United States little brother falling lockstep with us much the same way they did with the British years ago.

The United States likes having a well defined enemy and since the fall of the Soviet Union we have been looking for a suitable replacement. The terrorists are too vague, non centralized, and too intertwined into many friendly countries to be a suitable long term foe. China on the other hand, makes the perfect strategic rival and boogeyman for American policy… and they are communists too. Canada has taken a different road.

Canada was late in recognizing the communist Chinese government. It took a while for Canadians to forget that they had fought Chinese soldiers in Korea. The Canadian approach was different than the US. Canada did not see China as leverage against the Soviets in the Cold War. Rather, it saw China as a market for its wheat and the opportunity to be China’s link to the West. It was a practical rather than a strategic relationship. Canada also differed from the United States in its policy of engagement, which is not as confrontational as it sounds. The Canadian policy has been one of inclusion rather than isolation. Inclusion tends to minimize confrontation and maximize cooperation. The Chinese would be much more willing to reform if they were an active member of the community rather than isolated. As an example, the United States isolated North Korea, but opened to Vietnam. Vietnam is allowing private businesses and trade with the West. The people are living better than they have been, but admittedly it is not perfect and has a ways to go. There have been improvements in Vietnam, but none in North Korea. Inclusion brings change; Isolation brings confrontation.

Engaging China is a forty years study of of the policy of inclusion. It is also Canadian history. Perhaps the most interesting part is that there are no ideological tensions between, what Americans saw as life and death battle of, communism and capitalism. There are bumps in the road on issues like human rights and a slow evolution of peaceful policy. It is a very detailed diplomatic history. I do not think I highlighted a book this much since graduate school. It is a good history for all North Americans. For Americans, it will also provide a good comparison of policies. It is interesting how differently a country so ideologically, historically, and culturally similar to the United States has dealt with China.