Book Review: Lost Beneath the Ice: The Story of HMS Investigator 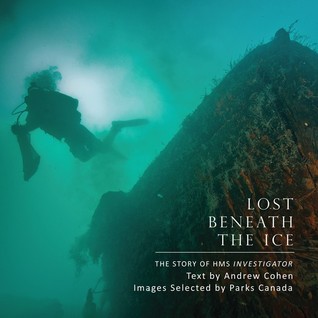 Lost Beneath the Ice: The Story of HMS Investigator by Andrew Cohen is a short history of the men of the HMS Investigator and their three winters stranded in the Arctic. Cohen is a professor of journalism and international affairs at Carleton University. He writes a syndicated column for Postmedia Newspapers and is a regular commentator on television. Cohen’s previous books are While Canada Slept and Unfinished Canada.

Lost Beneath the Ice is separated into four sections. The first section is the story of HMS Investigator voyage into the Arctic, its beaching, and discovery of the Northwest Passage. The mid-nineteenth century was a time of adventure. England, after the defeat of Napoleon, needed something to do with its large navy in peacetime. One use of the navy was exploration. The Arctic offered a promise of a shortcut to the Indies by means of the long sought after Northwest Passage. There was profit to be found in a shorter route and avoiding the long and dangerous trip around South America. There was the sense of adventure (and money) in the exploration, and sometimes that competition and promises of glory lead to some bad decisions. One of those bad decisions was beaching for the winter in Mercy Bay. The men would eventually spend three winters in the Arctic struggling to survive.

Lost Beneath the Ice is a short history and the report of the recent discovery of the HMS Investigator. The illustrations make up an important part of the book both the historical and recent photographs. The history is very concise, but very good. It does make me wonder what the men of the HMS Investigator thought about their discovery of the Northwest Passage and the realization that is was ultimately useless for navigation. Three long winters in isolation, on limited rations, waiting for a thaw that never came…I guess something practical would have made most of the men happy– to make it home alive. A very good read on a very limited topic.