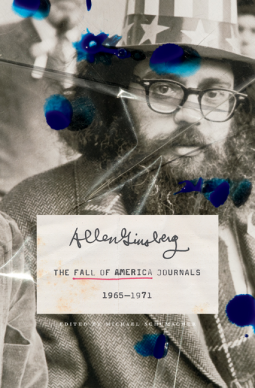 The Fall of America Journals, 1965–1971 by Allen Ginsberg is a publication of the University of Minnesota Press.  Ginsberg was an American poet and writer. As a student at Columbia University in the 1940s, he began friendships with William S. Burroughs and Jack Kerouac, forming the core of the Beat Generation. He vigorously opposed militarism, economic materialism, and sexual repression, and he embodied various aspects of this counterculture with his views on drugs, hostility to bureaucracy, and openness to Eastern religions.

The journals are edited, transcribed, and annotated by Michael Schumacher. Schumacher has written extensively about Allen Ginsberg and the Beat Generation. His articles, reviews, and essays have appeared in newspapers and magazines across the country. He is editor of Family Business, a collection of letters between Allen and Louis Ginsberg, and The Essential Ginsberg, a volume of the best of Ginsberg’s poems, essays, songs, letters, journal entries, interviews, and photographs.

Ginsberg’s journals have been published in the past, most notably his journals from Cuba and Czechoslavakia.  Those journals were mainly travelogues recording his experiences.  The Fall of America Journals are very different.  These were meant to be a recording of art as it happened.  With a tape recorder from Bob Dylan and a van from a grant, Ginsberg wanted to create his own version of “On The Road” in audio format.  The beginning of the journal is mostly descriptive of the Pacific Northwest but peppered with dreams, worry over Vietnam, interactions with the people he is with.  It reads almost the same as the Eastern European Journals.  However, about a quarter of the way through the book Ginsberg breaks out in poetry.  It is rough and unhewn, but with notes from Schumacher, the reader can see the development of the poems that would become The Fall of America. The text also contains photographs of the journeys and something that surprised me.  Although I am by no means a Ginsberg expert, I have read some of his and his colleagues’ poetry.  One of the photographs is the notes for a poem about my home town.  A poem I missed in all my other reading.

The reading goes on sometimes fragmented and other times seeming almost complete.  It is interesting to follow along with Schumacher’s notes as to what is being recorded and where it falls into The Fall of America. Having both books open and available is rewarding — the inspiration and the final product.  Although the journals can be read straight through, it is not an easy task. Schumacher’s notations in the text and introductions provide the reader with enough background and context to follow along.  The notations are helpful but sometimes seem to be a bit much.  For example, Joan Baez is cited as a “popular folksinger.”  All in all, this is an excellent companion to The Fall of America and a personal look at Ginsberg’s thoughts on war, drugs, sex, and America.