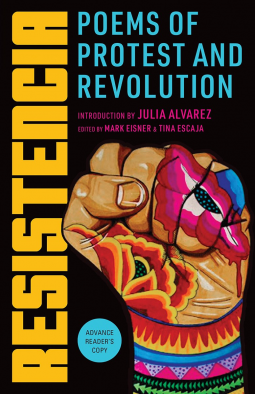 Resistencia: Poems of Protest and Revolution edited by Mark Eisner and Tina Escaja is published by W. W. Norton and Company’s Tin House.  Eisner spent many years backpacking through Latin America, focused on experiential learning, especially in Chile, where he translated Neruda on a rustic ranch near the coast. He has published NERUDA: The Biography of a Poet. Escaja is Distinguished Professor of Romance Languages and Gender & Women’s Studies, and Director of the Gender, Sexuality and Women’s Studies Program at the University of Vermont.

Latin America has historically been a region of violence.  From the bloody colonization, wars of independence, American occupations, coups, juntas, and outside interference peace and prosperity elude these rich lands.   It is a place of walls — to control people, to bury people, as a backdrop for firing squads, and as prisons.  The walls, however, also became the billboards of resistance with messages of hope and rebellion.  Julia Alvarez provides this insight in her introduction to the collection.  Alvarez is a Dominican-American poet, novelist, and essayist who sets the stage for the poetry with her moving words.

The poets come from a variety of countries, many of them in the headlines in the 1970s and 1980s.  Chile (Pinochet), El Salvador (Sandinistas), Panama (Ortega), Nicaragua (Contras and Somoza), and the list goes on with no country experiencing a free and open society.  Topics consist of poverty and unequal wealth distribution inside the country and from the north. For example, Jose Leonel Rugama compares the cost of the Apollo program to the starvation in Nicaragua — “Blessed are the poor for they shall inherit the moon.” The poems also capture the violence:

If, one day, on your street corner, death comes to you as a stray
bullet; if death grabs you from behind and kisses you on the
back of your neck with its tooth of lead;
Carlos Aguasaco

Latin America is a land of exceptional beauty, but a great deal has been ruined.  From Haiti to the Amazon forests, governments either allow the destruction or actively take part in the rape of the land.  There is a call for nature, and a cleaner life in the poetry in Ernest Pepin’s “This is my Country Rising.”

At the end of the collection, each poet is given a paragraph biography.  The many translators are also given individual biographies, including their academic and published works.  An impressive collection of Latin American poetry with a theme that many today can still embrace.