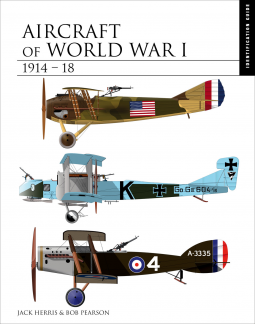 Aircraft of World War I 1914–1918: The Essential Aircraft Identification Guide by Jack Herris is an extensive collection of some of the Great War’s most used lanes. Herris is a former US Navy aviator with a degree in aeronautical engineering and noted aviation historian specializing in World War I aircraft. He regularly contributes to Over the Front, the journal of the League of World War I Aviation Historians, as well as other publications.

World War one was perhaps one of the most gruesome wars in that the military did not comprehend or adapt to the new technologies. The machine gun annihilated advancing infantry in unbelievable numbers. The calvary was devastated in the same manner. Trenches were used to hold positions and became a living hell of rats and death. But above the trenches, there was a new type of warfare that became glorified. The airplane was also new to war.

The rickety machines that flew over the trenches had their own dangers and a separate hell that many did not realize. Initially used for reconnaissance, the planes were slow, clumsy, and unarmed. They then evolved counter reconnaissance planes and moved from hand weapons and bags of bricks to mounted and synchronized machine guns. The aircraft changed as the war continued.

Herris provides a pictorial history of that evolution. From the early pusher planes to massive bombers are chronicled along with the famous fighters of the war. What Herris also does is give the reader a specification sheet for each aircraft. Although not a detailed history, these specifications show a clear path of development. Furthermore, the illustrations are also reminiscent of military identification cards. The aircraft’s markings and colors identify not only nationality but also the units flying the plane. The full-color illustrations throughout the book make this a welcome addition to anyone interested in World War I or military aviation. Very well done.