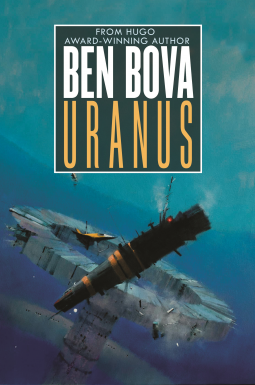 Uranus, by Ben Bova, is a science fiction novel set on a space station orbiting the planet Uranus. Bova not only writes about the future; he has helped to create it. The author of more than 130 futuristic novels and nonfiction books, he has been involved in science and high technology since the very beginnings of the space program. He has also been an award-winning editor and an executive in the aerospace industry.

I was impressed a few years ago reading Moonrise and Moonwar. I liked the realism of the writing and how the story and characters meshed. Uranus, however, is different. It started with a few excellent themes. First, was the space station orbiting Uranus led by Kyle Umber, a very idealistic, but open-minded religious leader. His goal is to save the poor and undesirables by cleaning them up and taking them to the space station Haven. There, removed from the vices of earth, the new settlers would have a clean start free from earthly temptations. His project is financed by Evan Waxman, who has his own agenda. The other main characters are Raven Marchesi, a former prostitute from Italy, and Tomas Gomez and astronomer. Gomez makes an extraordinary discovery on Uranus, which should drive the novel using the space station as a source of characters and setting. However, the story gets tied up in too many small items on the space station as well as more significant issues that compete for the central role in the book.

Although most of the smaller stories are possible, they evolve too quickly and seem forced or too simplistic. There are key themes like drugs, corruption, and individuality that could have been almost complete stories in themselves. Instead, they are half developed and wedged into place. The Uranus discovery could have been an entire novel in itself, but it is so interrupted that it seems to be missing a great deal of complexity. The lack of detail could be why the book read so fast. I read three-quarters of it in one sitting. Although there is much that could be liked about the book, I felt that I was reading a young adult novel. There was a lot of surface area but little depth in the book. I was hoping for much more.