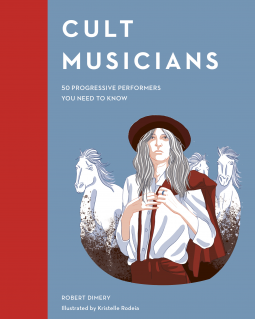 Cult Musicians: 50 Progressive Performers You Need to Know by Robert Dimery is a wide-ranging look at musicians who are or were a bit outside the mainstream in their time.  Dimery is a freelance writer and editor who specializes in popular music and has worked for a variety of magazines, including London Time Out and Vogue.

I guess we all lock into a certain range of music in our youth and despite promises of not stagnating in one era like our parents, we do just that.  High school was the era of Van Halen, Pink Floyd, and Led Zeppelin for my clique of friends.  I still listen to Led Zeppelin and Pink Floyd on occasion but lost most interest in Van Halen (and for the record, never liked Van Hagar).  It is not so much what you listened to with your friends but what you listened to when your friends weren’t around.  Artists like Patti Smith played a role in something contrary to the mainstream. A type of music that was very different but intriguing and still years later I still see her in concert when she comes to town.  Seeing the Plasmatics on Tom Snyder’s Late Show or hearing the overnight DJ playing Lydia Lunch was a major musical event in my youth.   Dimery gives the reader fifty artists, Smith and Lunch included, from a wide range of musical backgrounds from rock to spiritual and funk to country that show we all follow some version of cult music.

I certainly will admit that Frank Zappa was a cult musician,  but PJ Harvey and Iggy Pop seem like a bit of a stretch to me until I considered what they broke away from and created as a new normal. Although a fairly short book, Cult Musicians will no doubt have a favorite musician, a few you heard of or liked in passing, and many that are new to you.  For some it’s a nice trip back into the age of radio before MTV and YouTube for others it is MTV, YouTube, and your favorite streaming service.  These are the artist that changed music or at least gave it their best try; some successful and others not.  And for some it was just making art:

If you’re doing it for the money, you’re not doing art. You’re doing commerce.