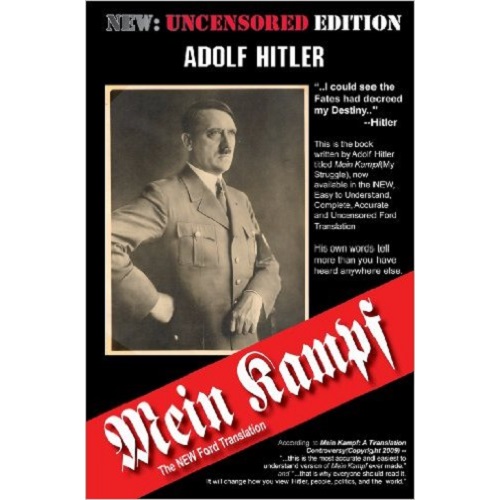 This is the evil book on the shelf. Many people comment on it, yet few have read it. Granted, it is hard to read because it is a transcript of Hitler speaking from his prison cell and transcribed by Hess. The writing seems like rambling at times, but that is because it is meant to be a very long speech, not a smooth flowing memoir. This is the reason I chose the Audible edition of the book, and it made quite a difference in understanding the text. Hearing it is much more comprehensible than reading it.

Hitler is a man who sees his home country, Austria, fall apart. The Austro-Hungarian Empire is a hodge-podge of nationalities, and many peoples were not willing members of the empire. The glory that was Austria and Vienna is gone. Internal strife and commitment to make the Empire inclusive drags it down. Hitler begins his attack on the Slavs, socialists, and Jews for ruining the German influence and accomplishments.

After the First World War, things in Germany are not well. It lost the conflict. But how the war was lost becomes the question. Hitler argues that the war was lost because of betrayal in the homeland. The German army, which he was a member of,  did not retreat into Germany. They were told to quit instead of losing in battle.

Furthermore, the German army lacked the resources that the Allies had, so they had fought more than bravely to hold their ground. In Hitler’s mind, the army was defeated by traitors at home. He places that blame on Jewish bankers and socialists.

Hitler turns to social issues. After the war, in Germany, marriage, is under attack. The young adults cannot afford to marry and move off on their own. This creates immorality. Prostitutes and syphilis take up the slack of men not being able to earn a living wage. Marriages were not supporting racial purity.  Education also needed reform; it needed to be physical as well as mental. German students would be required to meet their potential and remain pure.

As the second part of the book begins, the reader will get the full dose of anti-semitism, anti-communism, and hatred to almost every nation in the world (England gets off easy as does the US only for its restrictive immigration policy). Some rants sound ridiculous and senseless like “Marxist Capitalist Jews” and references to Elders of Zion.

I can see how the first part of the book helped Hitler and how it was inviting to average Germans. It is a “Make Germany Great Again” campaign. The campaign breaks down as: We have a problem. Prop up the military. Stress the greatness of the past. Blame immigrants. Find a group(s) to hate. Hint at the divine. Demonize the opposition. Hitler used this to gain popularity and support for promoting what Germany could be (again or mythically was) and his anti-socialist position, not from anti-semitism. The promise and the result is rarely the same thing in politics. This book remains vital despite its vile hatred because it is crucial to learn how someone like Hitler can gain power.  The German people were not evil, the most considerable majority was sickened by the concentration camps.  The most profound evil does not make a grand entrance.  It comes as a savior promising greatness and slowly evolves.