Book Review — Anonymous Is a Woman: A Global Chronicle of Gender Inequality 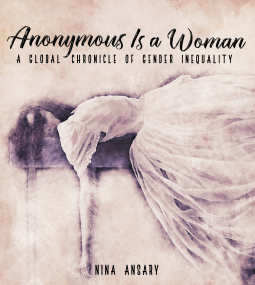 Anonymous Is a Woman: A Global Chronicle of Gender Inequality by Nina Ansary is a study of women’s equality in the world and time.  Ansary is an Iranian–American historian and author best known for her work on women’s equity in Iran. Ansary’s research has notably countered conventional assumptions of the progress of women in Iran while continuing to advocate for full emancipation.

“I would venture to guess that Anon, who wrote so many poems without signing them, was often a woman.” —Virginia Woolf

Woolf’s original quote has evolved into the more straightforward “Anonymous is a woman.”  The facts are the same in either version of the quote.  Women who make up over half the population of the world make up only a tiny part of recorded history.  Ansary examines the women’s suffragette movement and its history as well as reviewing what makes a campaign successful.  Women fought for the end of slavery and were disappointed that the 15th Amendment, although allowing every man to vote it neglected to include women. Rather than banding together with African-American women and continuing to fight a division along racial lines now formed.  What stopped the Equal Rights Amendment from gaining support but allowed Rosa Parks to become a national hero and leader in Civil Rights?

Today we here about the wage disparity of men’s and women’s wages in the same job, but many would think thinks have gotten much better.  Women authors like George Eliot (Mary Ann Evans) no longer hide their names because women writers are accepted as equal to men.  But how many people know what the J stands for in J. K. Rowlings?

Women have made gains, and that is reflected in the Global Gender Gap scores, which examine many aspects of equality in politics, pay, health, freedom, opportunity, and education.  Not too surprising, three Scandinavian countries hold the top spot, and Africa and the Near East make up the bottom of the list.  Countries like Albania,  Rwanda,  Belarus, Mexico, Laos, Bangladesh, and Bulgaria, all rank above the United States.  The U.S. doesn’t make it into the top 50.

Ansary includes biographies of fifty women from ancient times to the near present from around the world who made important discoveries, literary contributions, and even a general.  Being fairly well-read and having an undergraduate degree in history, I thought I would have had to run across at least a few of these women in my studies.  The short answer is “no.” I remember the leader of the Chilean independence movement, the leader of Algerian independence, the powerful Boyars of medieval Russia. Still, I can say I haven’t heard of these fifty equally important women.

Woolf also created a woman in history — Judith Shakespeare.  William’s sister was just as equally talented but equally rejected simply because she was a woman.

“Now my belief is that this poet who never wrote a word and was buried at the cross-roads still lives. She lives in you and in me, and in many other women who are not here to-night, for they are washing up the dishes and putting the children to bed.”

Women have made great strides despite society and their environment; However, much like the lower ranks of infantry that died breaking enemy lines and turned the course of the war, they are footnoted and individually forgotten. Women have come a long way, but unfortunately, they still have a long way to go to be truly equal. An enlightening read.

One response to “Book Review — Anonymous Is a Woman: A Global Chronicle of Gender Inequality”