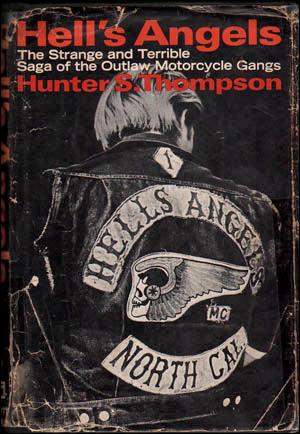 Hell’s Angels: A Strange and Terrible Saga by Hunter S. Thompson is the author’s account of several months with the world’s most recognized motorcycle club.  Thompson was an American journalist and author, and the founder of the gonzo journalism movement.

The Hells Angels* are caught in their infancy in Hunter’s book.  What made the Hells Angels different than the other motorcycle clubs of the times and region is also examined.  There were plenty of organizations at the time.  Perhaps first was the media’s love of fear-mongering.  Scary things keep people up at night, communists, bikers, serial killers, and that sort of thing.  Events like the fictional portrayal of Hollister in 1947, Brando and Marvin in The Wild One, and the 1965 Lynch Report helped created a menace to society. The Hells Angels were singled out by the Lynch Report as a threat.  This took a local club and pushed it to national attention. Suddenly the Hells Angels were “the motorcycle club” everyone wanted to know about, avoid, have law enforcement stamp out, join, or simply watch from a safe distance.

Thompson tells the story from his personal experience with the club and finding his way to friendship as a reporter was no easy task.  The Hells Angels realized everyone was getting rich off of them, except for them.  Reporters, they said, twisted stories to sell more papers.  The bigger the story, the better.  Bigger misleading stories led to more police interest in the club. Thompson tells of the many times members were accused of crimes rape, assault, and murder, but convicted of very few crimes.  One has to remember too that at this time, the Hells Angels had no treasury or army of lawyers.  They struggled to make bail for disorderly conduct charges.  So it was not expert legal teams clearing their names. Many victims recanted their stories; was it because the events did not happen as described or fear?  Thompson leans toward the “that was not the way it happened.”  The parties got wild, and sometimes people do things they later regretted and look for a way out.

Granted, the Hells Angels were not innocent and definitely not part of the “You meet the nicest people on a Honda” crowd.  They were different, did not want to fit in, and made their own decisions.  They hated war protesters but also had a strong dislike for law enforcement and embraced drug use.  They were outside of every group.  Thompson, throughout his life, proved not to be the world’s most reliable narrator, but he seems to have taken notes when writing this book to include documenting what drugs he used.  All in all, an exciting tale younger years of the world’s most recognized motorcycle club.

*Unlike the book title, the club does not use an apostrophe in its name.