Book Review — The Art of Solitude 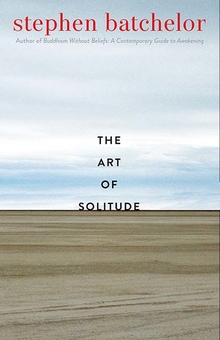 The Art of Solitude by Stephen Batchelor is an examination of the concept of solitude. Batchelor is a British author and teacher, writing books and articles on Buddhist topics and leading meditation retreats throughout the world. He is a noted proponent of agnostic or secular Buddhism.

Solitude can mean many things. It can be physical isolation or even mental or spiritual isolation. On the physical side of isolation, we can be alone in the woods like the author describes in one of his adventures. However, how alone are we? Sounds of traffic. Vapor trails of overhead jets. Wildlife. Batchelor also goes to the extreme, and he recalls the story of Robert Kull (and a kitten) who spent a year on an uninhabited island at the tip of Patagonia. His isolation did not feel complete as he wrote in his journal; he knew others would read it, and that made a connection to others, breaking his true feeling of solitude.

Batchelor takes the reader to Mexico, Korea, and Austria to experience spiritual solitude. Two of these experiences involved drugs — peyote and ayahuasca. In Korea, it involved cold and rain. Batchelor also references to Aldous Huxley and two others that he is fond of: French essayist Michel de Montaigne (1553-1593) and Dutch painter Johannes Vermeer (1632- 1675) probably best known for Girl with a Pearl Earring.

Solitude is a mix of Buddhism, drug experiences, stories, and a little art history. The collage effect of the chapters adds to the experience of the book. It creates a bit of a whirlwind tour in discussing art to serious Buddhism to seemingly 1960s counterculture drug experiences. The book can be opened to any chapter read. Each chapter is self-contained rather than building upon the previous chapter.

Included in Solitude is the author’s translations of the Four Eights (The four eight-verse poems from the Aṭṭhakavagga of the Sutta Nipāta), which he refers to throughout the book. Tying in the arts into his experience is also appreciated and appealing as well as his personal experiences. The use of drugs in this context is a little confusing. I have no personal qualms about mind-expanding drugs, but it did not seem to fit well with the other material. In Buddhist thinking, that the use of intoxicants is counterproductive to developing an enlightened mind. Batchelor does admit to this, and he does not encourage others to use intoxicants. He does, however, defend his experiments with the explanation that during meditation, we release dopamine, norepinephrine, or serotonin into our system. Does it matter if chemicals from plants enter our body too? His question is a bit more elegant than mine but expands on the idea that it is chemicals that allow us to enter more profound meditation. I am not convinced of that thinking, and I think there is a line between spiritual tranquility and recreational peacefulness. All in all, Solitude is a fascinating read that although it shifts topics, it has something for everyone but not everything for someone.