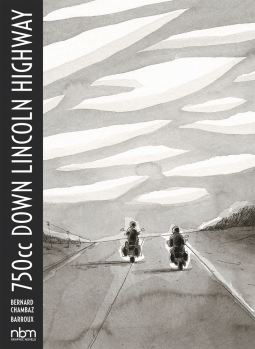 750cc Down Lincoln Highway by Bernard Chambaz is a graphic novel of unexpected adventure.  Chambaz is a French novelist, historian, and poet, winner of several French literary prizes including the prestigious Goncourt for his first novel, L’Arbre de vies.

What is a runner to do when right before the start of a marathon he gets a breakup text instead of well-wishing?  He goes to a bar and drinks bourbon. A discussion begins with another patron and the Lincoln Highway becomes the subject of conversation.  This leads our author to rent a motorcycle and ride the highway from New York to California.  The general feeling as someone who rides is that the author may be new to riding.  He refers to his Honda Shadow as a 750cc motorcycle, which it is, but displacement is usually used to describe sportbikes and not cruisers.  A Honda Shadow is a Shadow and those in the know understand its a750.  Riding in the rain also seems to be a new experience for Chamaz.

What makes this worth reading is the separation of life experiences.  Riding to forget his ex-girlfriend or at least come to terms with the breakup. Second, it is separating her from his running. And finally, it is about the ride and the other riders one meets and places that are seen.  Runners have their cliques and groupings but people on motorcycles are a closer group, strangers on the road are quick to bond and share stories and help.  The road itself is a much different place on a motorcycle,  It is not the same road that one experiences in a car. A good book on life, people, and healing.