“I’ll always be a word man. Better than a bird man” 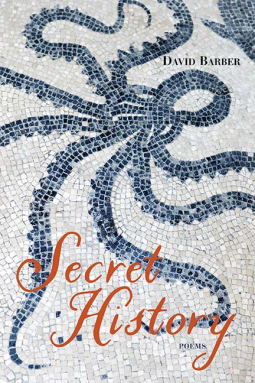 Secret History: Poems by David Barber is a collection of eclectic poetry.  Barber is the author of Wonder Cabinet and The Spirit Level, which received the Terrence Des Pres Prize from TriQuarterly Books. He is the poetry editor of The Atlantic and his poetry has been anthologized in Literature: An Introduction to Fiction, Poetry, Drama, and Writing. His work has been supported by fellowships from the National Endowment for the Arts, the Bread Loaf Writing Conference, the Massachusetts Cultural Council, and PEN New England.

Words and word use are the topics of this selection.  There have been more than a few times that I had to read something written by someone else whether it was a resume, recommendation, or a student’s thesis and wondered how much time was spent in a thesaurus.   There is a natural flow of words punctuated by although correct, but out of place words that sometimes has one running to a dictionary.  Other times the same word is repeated so many times that reading becomes tedious.  Barber manages to do both and makes reading enjoyable.

Poems titled “Praxitelean”, “Mamihlapinatapai”, “xylotheque”, and “Lacrimarium” demonstrate my first point.  Poems like “Sand Man”, a fifty-five line poem, where every line ends with the word sand and almost every stanza begins with the same demonstrate the second point.  Barber takes things that would normally be as annoying as nails on a chalkboard and turns them into an enjoyable tune.  He likes repetition of not only words but of phrases  In other poems, he invites Yogi Berra and Cab Calloway to add their wisdom to his work.  In some poems, he takes near and slant rhymes to an amazing new level.  In Franklin Arithmetic, one must guess where the textbook questions end and the poet’s imagination begins.

Barber is a word man.  He molds words like a potter molds clay.  His topics are not the most well known, and add a bit of mystery to his work.  The more one looks into the poems the more one sees.  The poem “Barbarians” is particularly interesting in that the end words of the unrhymed couplets when read alone seem to add an extra dimension to the poem.  Fascinating word working for those who are willing to sit, read, think, and discover.