Book Review — The Economist’s Hour: The Rise of a Discipline, the Failures of Globalization, and the Road to Nationalism 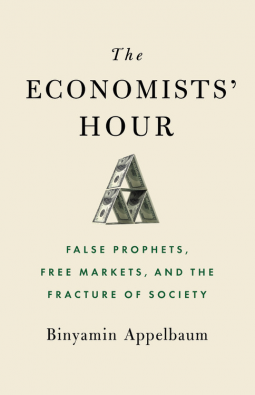 The Economist’s Hour: The Rise of a Discipline, the Failures of Globalization, and the Road to Nationalism by Binyamin Appelbaum is the study of post World War II economics centered on the United States.  Appelbaum is the lead writer on business and economics for the Editorial Board of The New York Times. He joined the board in March 2019. He was previously a Washington correspondent for the Times, covering the Federal Reserve and other aspects of economic policy.

For most of the history of the United States, economists had little to do with the practical aspects of economic policy.  Hidden away in basements and never in positions of power, in fact, in 1972 George Schultz became the first economist to serve as the Secretary of the Treasury.  The recovery of Europe and Japan (and Asia in general) from World War II ended the US reign as the global producer and with it an economic turndown.  Economic battles began to emerge as Keynesian policy began to show cracks and fail.

Appelbaum examines several areas of the economy or economic issues in this book.  One of the first issues addressed in this book is the draft.  Today the all volunteer military is easily seen as superior to conscription.  Life in the military is hard enough with people who want to be there, let alone people put there against their will.  The question becomes, is it more cost effective? That became the struggle.

The cost of human life is another issue for economists.  There are the insurance aspects of that cost but it also plays a role in regulation.  For example, if a safety feature on a car can save a certain amount of lives and costs a certain amount of dollars where does the cost in saved lives exceed the cost of the feature.   Adding $50 to a cost of a car to save 1000 lives a year is easily worth it.  Adding $1,000 to the cost of a car to save five lives a year would probably not be worth the cost.