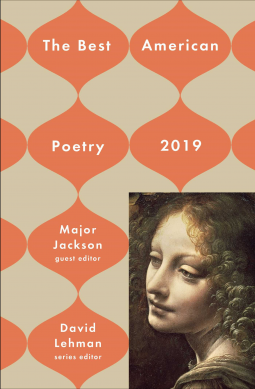 The 2019 edition of The Best American Poetry begins with an impassioned introduction by David Lehman on political correctness in today’s society. Major Jackson is the guest editor this year and poses the theme of artistic dignity vs street cred. With both of the introductions, I was expecting the poetry to follow suit. The poetry, however, doesn’t seem to have the punch I was expecting from the introductions. Although very modern in form and seemingly less conservative, although not less controversial, then past editions, this does not seem to be a “best of” collection. Rather than the more themed collections of past years, this year’s edition seems to cover a wide spectrum, like a survey. It could be the “street cred” of this edition that has left me, for the first time, feeling slightly disappointed. Maybe like music readers develop an ear for only certain types of poetry. Perhaps, it is just me getting old and clinging to the more traditional type of poetry rather than embracing the new. A few poems did stand out from the many; most notably Deborah Landau’s “Soft Targets.”