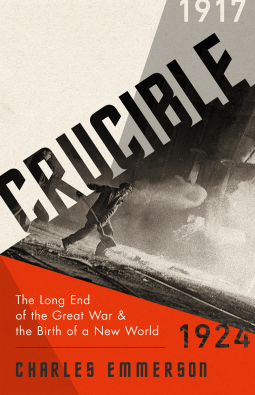 Crucible: The Long End of the Great War and the Birth of a New World, 1917-1924 by Charles Emmerson is an extensive history about the close of World War I and its early aftermath.  Emmerson is a Senior Research Fellow at Chatham House working on resource security, foreign policy, and global geopolitics. He is the author of The Future History of the Arctic and 1913: In Search of the World Before the Great War. He was formerly a writer for the Financial Times and continues to publish regularly on international affairs.

The First World War changed the entire world dynamic.  Empire waned as the British Empire began to lose control in India, leaving thousands dead.  Physics changed when a German-born scientist received the Nobel Prize for the photoelectric effect (not relativity).  Sigmund Freud changed the field of psychology with psychoanalysis.  A Russian exile living in Zurich would make an almost unbelievable train trip back to Russia and lead a revolution.  He would work with Leon Trotsky and meet with a Georgian bank robber who would become the General Secretary of the Communist Party and create a different revolution.  The US and Woodrow Wilson would rise and quickly fall from prominence in European matters.  The US had its own problems at home, including violent racism.  Democracy spread in some countries and retracted in others. In defeated Germany, the army fought communists in riots, and a young Austrian immigrant and WWI veteran began his to power. In Italy, another war veteran would lead 30,000 Blackshirts to the March on Rome.  With the crumbling of the Ottoman Empire, a young leader would become the namesake of his country. The map of Europe was redrawn moving borders and creating and destroying countries.  In the Middle East, England and France divided the land and spread their influence.  It was not the same world as it was in 1914.

In most basic histories, readers are led to believe that the Treaty of Versailles was the cause of the unsuccessful peace in Europe. In reality, it was much more than that.  It was the start of a different era in many aspects — Industrialization, mechanization, nationalism, science, and worker’s rights.  Even in art, modernism rose in literature and art. To many, this was as great of a shock as the political upheavals.

Emmerson explores the complexities of the tail end of WWI and the beginning of the Interwar years.  Dividing the book’s chapters by year, the reader will see a timeline that switches between countries and people in a coherent manner. This division is practical because it shows the flow of history on the whole instead of individual nations.  This is the beginning of the interconnectedness of all countries rather than just the influence of regional powers. It was the beginning of a new world, new ideas, modern science, and unfortunately the beginning of a darker side of the future.  A well done, extensive history, of a significant but little-studied period.