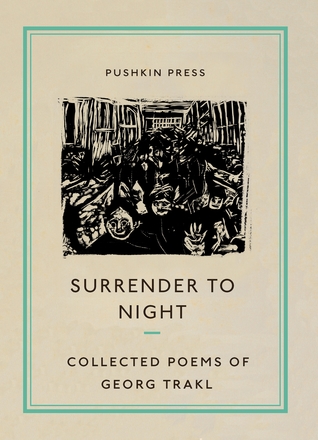 Austrian poet Georg Trakl was trained as a pharmacist in Vienna where his friends helped him get his first poetry published. His service as a medical officer on the Eastern Front during WWI led to depression and attempted suicide. Trakl did succeed in ending his life with a cocaine overdose in November of 1914. Will Stone provides the translation. Stone holds a degree in Literary Translation from the University of East Anglia, Norwich, and has produced prose and poetry translations of the works of several writers.

Black skies of metal
Crossing in the red storms at evening Hunger crazed crows drift
Over the parks mournful and pale.

He carries several themes through his work, most notably, Fall, Winter, and silence.  In many poems, there is a youthful feeling balancing with the lateness of the year.  Although he only served in the opening months of the First World War, there is a noticeable darkness in many of his works from this period.  The horrors of the war are clearly evident.  The earlier works are meant to be read and examined in much the same way one would experience a painting by Monet.  A remarkable poetic experience.  This is also a collection of poetry where one cannot overlook the translator. Stone’s work is seamless and unnoticeable in the reading. He is able to preserve the poet’s original intent. Masterfully done.