Book Review — The DNA of Democracy 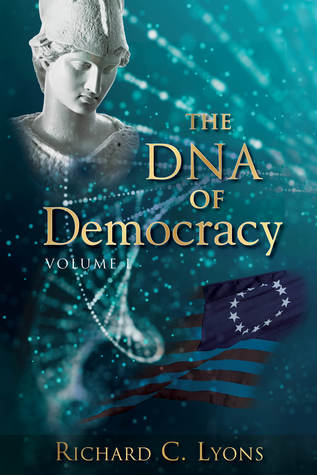 Richard C. Lyons’ The DNA of Democracy is an engaging discussion of the history of democracy. A large section of the book is devoted to American democracy and some of its failings like slavery and the treatment of Native Americans. Another large percentage of the book concerns the development of British democracy. The reader will also experience the familiar roots of democracy in Greece and Rome. Lyons’ also tries to fit the Old Testament in the mix with less success.

The discussion of democracy and tyranny presents an interesting comparison. One may believe that there is a vast separation between the two types of governments, but often they switch slowly and other times quickly.  Political philosopher, Jean Jaques Rousseau, is celebrated as the Father of Modern Democracy.  He is also known as the Father of Modern Tyranny by the same writings.  Many things do separate the two forms of government.  Art, universities, (freedom of) religion, and the press thrive in democracies and stagnate under tyranny.  Capitalism and open markets also thrive in democratic or free societies and are controlled or eliminated under tyranny.

Lyon’s presents and discusses twelve masterpieces and four amendments to the US Constitution.   Old world codes are represented by the Ten Commandments, the Constitutions of Athens and Rome, and The Twelve Tablets.  Codifying the laws and the foundations of civilizations ensured that they could not easily be changed.  Three amendments to the US Constitution required a civil war before they were passed.  The 19th Amendment essentially doubled the number of eligible voters and took nearly one hundred and fifty years to allow women to participate in our democracy.

The DNA of Democracy resembles living DNA.  It evolves.  It adapts.  At times it mutates into something that resembles democracy but is actually a cancer attacking freedom.  Democracy is an ideal that man is working to achieve.  It is not always easy, and there are failures.  It is, however, the history of mankind.