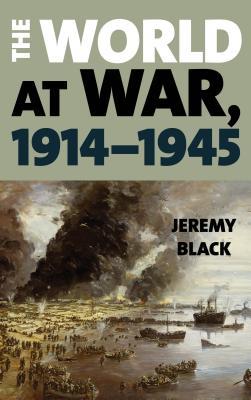 The World at War, 1914-1945 by Jeremy Black, is a study of modern warfare in the twentieth century. Black MBE is an English historian and a Professor of History at the University of Exeter. He is a senior fellow at the Center for the Study of America and the West at the Foreign Policy Research Institute.

The thirty year period covered in the book is probably the most critical period in warfare.  It was a period of full-scale industrial warfare.  It was a period where the civilian population became victims of war not only by the scarcity of food and materials but also as targets.  At first, the attacks that are meant to create fear in the population later as bombing became more precise and on a grander scale, industrial centers were targeted.

Black examines not only the two significant periods of warfare — World War I and World War II, he also discusses the period between.  Interwar years were will with small scale wars around the world as well as significant internal wars in Russia, Spain, and China.  This was also a period of advancement in weapons.  The tank and the airplane saw substantial improvements from rickety and failure prone machines into practical tools of war.

The World At War examines aspects of the wars in causes, land warfare, naval warfare, air warfare, and geopolitical issues of the conflicts. Twentieth-century Wars were much more complex and connected at many levels than the casual historian would think.  Black creates a web that ties everything together in a neat package.  A well written and extremely well-documented history of the evolution of warfare and its effects.