Book Review — Why America Loses Wars: Limited War and US Strategy from the Korean War to the Present 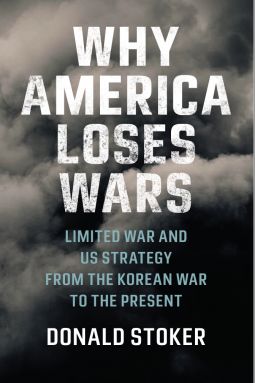 Why America Loses Wars: Limited War and US Strategy from the Korean War to the Present by Donald Stoker is an examination of war theory and the practice of the United States in a period where the United States did not have a single declared war. Stoker was a Professor of Strategy and Policy for the U.S. Naval War College’s program at the Naval Postgraduate School in Monterey, California for 18 years. He currently is a Visiting Fellow and Fulbright Visiting Professor of International Relations, Diplomatic Academy of Vienna, Austria.

Why America Loses Wars is a scholarly look at war and peace. Stoker draws heavily from Clausewitz to form his thesis and uses recent history to support his thinking. Kissinger would agree with America’s most significant reason for losing wars — lack of long term strategy. Machiavelli would also give the nod to not finishing the conflict correctly. America, by far, has the largest, strongest, best-equipped military in the history of the world (despite what national leaders say). We lost in Vietnam, effectively lost in Korea, have been to Iraq three times, and Afghanistan without a decisive victory. With that being said, in the first Iraq War, Colin Powell was heavily criticized by Secretary of Defense Dick Cheney for not developing a military plan for Iraq. Powell said he could not produce a plan until he had a clear political objective for the military action. That is probably one of the most important demands of a military leader in recent history — a clear objective for the military operation. Compared to the second Bush and his war on global terrorism, his father was much more decisive in setting a goal. The younger Bush’s war on global terrorism as an objective has been compared to “war on an abstract noun.” It may sound good, but it is not a tangible objective.

War in America has taken a turn. No recent president wants to admit being at war and that started with Truman and the Korean Conflict. Truman committed troops without a declaration of war; in fact, World War II was the last declaration of war issued by the United States. Now, if the war is popular congress usually goes ahead and funds the conflict, until it becomes unpopular. At that time, the military is forced to curtail its activities, and a quagmire develops. An actual declaration of war would help in several ways. First, it would require congressional approval which may not be expedient, but it would question and examine the goals of the conflict. Secondly, the president would need to present a clear objective to Congress rather than rally the American people to a cause. Consider: With proper thought, would America drop a winning conflict in Afghanistan to start a new war in Iraq? With proper thought and planning, would America have been able to achieve its goals in Afghanistan in less than seventeen years?

Stoker examines limited warfare and what the term means and what popular opinion makes it out to be. We are not a nation that is afraid of going to war; in fact, it seems we are too ready to go to war, just not finish it. War has become much like our infrastructure. We love to build great works; we don’t like to maintain them.  A critically important book combining theory and recent American military actions.