Book Review — By Time Is Everything Revealed: Irish Proverbs for Mindful Living 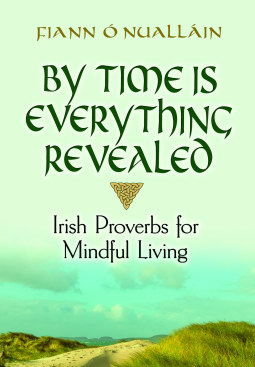 By Time Is Everything Revealed: Irish Proverbs for Mindful Living by Fiann Ó’Nualláin is a collection of Irish proverbs and Eastern philosophy. Although it does not sound like a very probable mix, O’Nuallain not only makes it work, he makes it seem natural. The first part of the book covers the author’s journey through Karate, Hinduism, and Buddhism in a very Western and Catholic country. This is not the path that many would take.

Ó’Nualláin introduces the reader to meditation in a way that is easy to understand and not a foreign feeling.  Mindfulness is explained in a very Western style, and even compassion seems more like common sense that those of an older generation practiced than something foreign.  Sitting meditation is taking the time to connect to things around you rather than the dwelling on the tensions of life.  The author uses washing dishes as a time of mindfulness. Something that has been in Western practice for quite some time is walking meditation.  Thinkers like Nietzsche, Rousseau, Kant, and Thoreau used walking as a way to connect to creativity and remove oneself from the chaos of life.  Walking should be done in solitude and used as a way to connect with the environment you.  That means no phone or music.

Some of the proverbs sound very familiar to English and American proverbs.  “Need teaches a plan” and “Change is the breath of life” are familiar sounding.  “Do good in return for evil” seems close to turning the other cheek.   “The mountain is good mustard” and “A slow hound is often lucky” require a bit of thought.  Ó’Nualláin explains the proverbs, translating them for Gaelic into English,  and offers action points or practical examples, for each precept.  There are also fifty-two proverbs, one for each week of the year, that can be studied and put into practice in an organized manner.

One response to “Book Review — By Time Is Everything Revealed: Irish Proverbs for Mindful Living”