Book Review — Inferno inside You: The Comedy Project Part 1 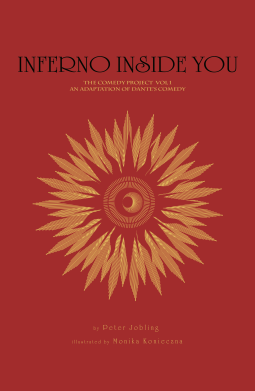 It has been almost 700 years since Dante wrote The Divine Comedy. How well does a book that old stand up in the modern world? Dante included people from his time in the book that most people do not know and probably many in Europe at the time would not have known either. It is also a book centered on religious themes. The Inferno’s levels of Hell were divided by the type of sin and each sin receiving more punishment as one descends the levels. Dante would also break the rules of his time and write in the local Italian dialect rather than Latin so that a more significant portion of the population could read it.

Jobling, taking a page from Dante, wants to make The Divine Comedy more accessible to people. Granted many people have little interest in reading a 700-year-old, long narrative poem that featured local religious and political figures along with a heavy dose of Catholic dogma. For those who have read it, The Divine Comedy is a bit more than that; it is a journey. To make the original a bit more readable to the average person. First, the religious overtones are removed and replaces with more modern themes. He also replaces the poetry with a more straightforward but still eloquent text:

The forester pointed further away,
and I saw Sappho from Lesbos,
talking to Lao Tzu and Buddha.
They were people, or as like people
as anyone was down here.
And then Krishna and Mohammed talking to Tolstoy and Mahatma Gandhi.
And then crouching quiet in a corner, Einstein.
And nearby were Cleopatra and Carl Gustav Jung.
This is a dream I thought, a fiction,
but I knew it was not.
It was me, in the middle of my life.

Rather than a heavy emphasis on the seven deadly sins, a more modern approach is taken:

I saw people there up to their eyebrows in boiling blood.
“These are the terrorists of this world,
the violence-loving believers,” said my forester.

Or our very world itself, given to us –
those who break its nature, deliberately,
as if it were nothing
as if they themselves were the world,
denying the wonder of that which they are a part,
denying the sense of creation,
the spirit of the origin of nature.

The modern take on sin and the more prose approach to the Divine Comedy do not seem to take away from the meaning of the original. Jobling plans to write Purgatory and Paradise for the 700th anniversary. These will be more difficult tasks. Hell, after all, is a fascinating place to visit. Most who read the original either only read the Inferno or the Inferno was their favorite or most memorable part. If Jobling does as well as he did with Inferno, Purgatory might be an exciting read (it is an incredibly dull place in the original). A well-done re-imagining of a classic for modern times.