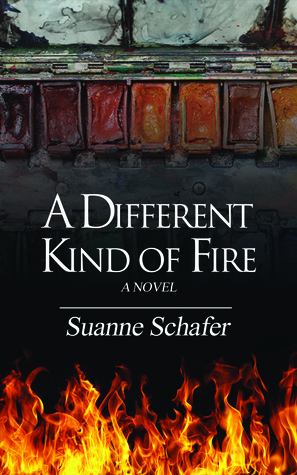 A Different Kind of Fire by Suanne Schafer is the story of Ruby Schmidt a young woman in West Texas near the turn of the twentieth century. I found this book in the Historical Fiction category and being a resident of Texas I thought I would give it a try. However, even before getting to the story I saw that the author is a member of the San Antonio Romance Authors and The Romance Writers of America. The Romance market is vast; it’s just that I am not part of it. Happily, as it turns out, this is not a romance novel.

Shortly into the book, I found the lead character Ruby Schmidt very likable. The strict West Texas environment both social and religious would be a tough place for a young female artist to get much notice and if she did, she would be reined in. Ruby develops into a strong lead female character who bends instead of breaks and uses her smarts to convince her parents to let her go to art school in Philidelphia.

What follows is a series of challenges to the character. Life in the big city is fast and attractive for an eligible young woman. Relationships develop unexpectedly. She left her presumed husband to be in Texas and finds an exciting world where reproductive health leaves many options open. There is also the challenge between family and developing a career. Furthermore, establishing a career as a woman in a man’s world is no easy task.

What I found most interesting in the novel is its relation to early twentieth-century British Literature. There was the division between city and country, although not as drastic as West Texas and Philidelphia. The early feminist writers included many of the same themes concerning the woman’s place and status to including voting and property rights (Vita Sackville-West lost Knole because of her sex). Relationships in British fiction are represented in books such as The Well of Loneliness. Careers for creative women appear in Virginia Woolf’s A Room of Her Own and admittedly require some money (Ruby uses her grandmother’s legacy). Not that the British women were unique in there struggle. Schafer demonstrates the same message in an American setting using historical events, legislation, and figures of the time. A well-written and thought out novel about America’s lesser-known feminist beginnings.