We have glimpses of heaven. So mild that the landing window was open, and I sat by the river watching a boat launched and half expected to find buds on the willows.
Virginia Woolf January 23, 1918 Richmond. 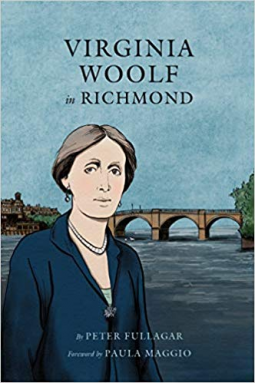 Virginia Woolf in Richmond attempt to accomplish two goals first is the effort to raise money to erect a full-size bronze statue of Virginia Woolf on the Richmond Riverside. The second is to counter a quote made in the movie The Hours — “But if it is a choice between Richmond and death, I choose death.” Virginia Woolf never made that comment, but for some reason, filmmakers chose to create it.  Hogarth House and Hogarth Press are/were located in Richmond and the settings for such works as Kew Gardens. Woolf wrote her first books short stories in Richmond. It was also where she and Leonard lived for ten years.

Fullagar writes in Virginia Woolf’s life in Richmond. Although written as a biography it is clearly centered on the ten years of 1914 through 1925 in which the Woolfs lived in Hogarth House. This is the beginning of Virginia Woolf as a writer. Here too is the beginnings of Hogarth press. Bought used and without any experience, the Woolfs became self-taught publishers. They not only published their own work including their first work Two Stories a collaboration between the Woolfs with Virginia writing The Mark on the Wall and Leonard writing Three Jews. Hogarth Press also published T.S. Eliot’s The Waste Land in 1924 and Vita Sackville-West’s The Edwardians in the 1930s.

Richmond provided Virginia Woolf with peaceful dictations of walks in Deer Park. The press was also a sort of therapy for Virginia Woolf. It occupied her mind with a task and helped prevent her from slipping back into illness. Richmond allowed for social interaction but without the rush and bustle of a fast-paced London. It was a tranquil life. Fullagar presents a well-written case for Woolf’s love of Richmond. Although Woolf is permanently linked with Bloomsbury, she does have deep roots in Richmond.