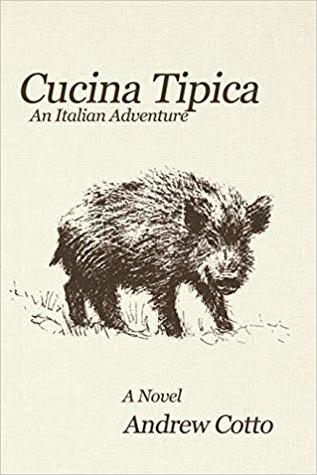 Cucina Tipica: An Italian Adventure, by Andrew Cotto, is the story of Boston area Jacoby Pines and his journey of self-discovery. The former rocker turned PR man finds himself out of a job and shunned by the industry. His fiancee Claire, a freelance food and travel writer, decides to take him on a year-long trip to Italy where she will be working. Although meant to be a time for Jacoby to recover, the stay turns out to be a source of fiction for the couple. Their time apart leaves Jacoby to investigate an old photo that he brought with him, hoping to discover something of his past. Through the course of the book, he meets Bob, from East Texas who has been living illegally and Helen from Melbourne who is both a bit refined and a little wild.

Cotto manages to capture Italian country life and regional themes in wine rich Italy. If the reader doesn’t care for Jacoby, there is more than enough food imagery throughout the book to keep the reader hungry. It would be an understatement to say food plays a predominant role in the book. Other themes enter the text that are surprisingly unexpected. Scenes like the Florence underground lead to some surprising descriptions and people that do not usually make it into the travel guides. Fetes, sports, and tradition round out the reader’s tour of Florence. Cucina Tipica translates to traditional cuisine, and although food and culture play a role in the story, there is enough of the uncommon fare to separate this novel from others set in Italy.