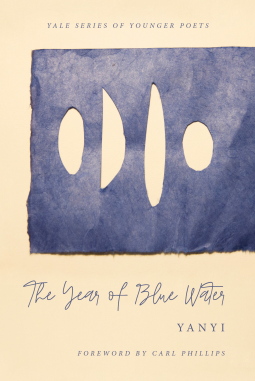 The Year of Blue Water by Yanyi is a collection of mostly prose poems covering a variety of current identity issues. Yanyi is a poet and critic who has received fellowships from the Asian American Writers’ Workshop, Poets House, and the Millay Colony for the Arts.

Racism, gender identity, orientation, and the idea of duality come into play in the poems. The poems themselves flow like stream of consciousness, but the stream seems much more polished with a natural structure and refinement.

What you touch will come to life: a whole room sprung in backwards words of people untalking to you.

The topics gently shift and flow. Being poor as a child and longing for Cherioes because they were so much better than the cheap copies. Later in life depression — being trapped in one’s self and part of the self not wanting to go on or taking personality tests to find out the person you are supposed because you are unable to or confused by what you think of yourself. Boundaries of one’s self are more complex than nineteenth-century French cities whose boundaries were set by the reach of the church bells peal.

The Year of Blue Water is a deep and exploratory account of one person’s life and confusion when examining one’s self and the world around. Masculinity is no longer driven by the male John Wayne figure and feminity no longer constrained by either June Cleaver. In the seventies, one British band would explain that “It was a mixed up, muddled up, shook up world.” Then it was a fringe idea today the grey areas become much more substantial than in the old duality. The order of a binary system has seemed to fade in everything from health and unhealthy to the world locked in as capitalist and communist systems. Yanyi explores the complexity of his own life in this fluid collection of prose poetry.