Book Review–The Forging of a Rebel 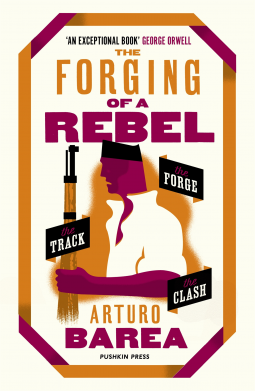 A unique autobiography and history of early twentieth century Spain. The first of the three volume book, The Forge, covers the Arturo Barea’s early life in Spain from 1905-1915.   Part history and part biography this volume details life in Spain.  In the second volume, The Track, Barea covers his years in the Rif War as Spain tries to hold on to its last colony.  He sees this as the beginning of the fascist movement in Spain.  The final volume, The Clash, covers the war in Spain and Barea’s exile to England.  Barea was in a rather unique position during the Spanish Civil War.  He fought the fascists but was not a communist which made him suspect on his own side. The third volume, by the way, is also the inspiration for a British punk band in the 1970s.

Barea offers details in two wars that are not much covered in the United States.  The Riff War and the Spanish Civil War.  The latter is remembered mostly for the Abraham Lincoln Brigade and its famous members.  Barea’s detailed writing style does seem long-winded at times, but he is chronicling events that would become a historical record and was likely fearful of the truth being suppressed by the Franco regime.  It was a period of brutality in both Morocco and Spain and became a prequel for the Second World War. Recommended for history readers with an interest in early 20th-century Spain.