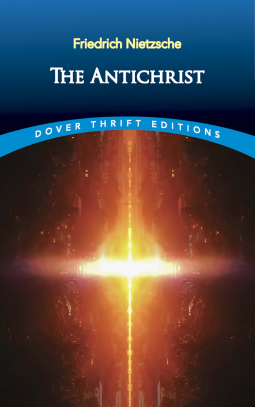 Nietzsche’s Antichrist, or more correctly Antichristian, is a sharp, well thought out attack on Christianity and organized religion. Nietzsche believed that all men were not created equal and that the equality created by Christianity made man weak. Nietzsche believed in the will to power or the individual acting to gain power and strength. Christianity, on the other hand, is a slave morality according to Nietzsche. Good and evil are judged by intentions. Nietzsche does say this book is for a small audience. The reader is one who must be entirely intellectually honest and willing to reject tradition.

This Dover edition presents a short biography on Nietzsche followed by an introduction to this work. The detailed introduction and translation from Germany are provided by H.L. Mencken. Mencken who was a scholar, social critic, journalist, and satirist. He spoke German growing up and became a great admirer of Nietzsche’s philosophy. This makes for an interesting read as the philosopher, and the translator were of the same beliefs. This edition is an excellent value from Dover Thrift Books for those who have an interest in Nietzsche. The Kindle edition is $0.99 and excellently formatted. The paperback edition is of the same quality and $3.00